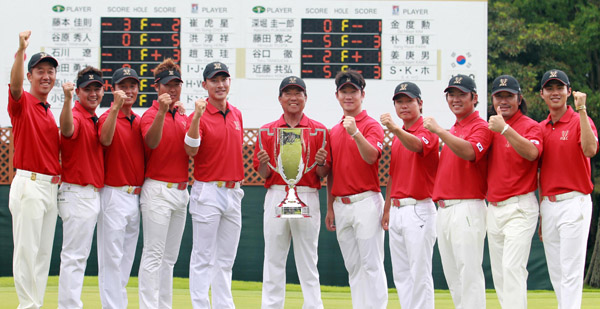 The 10-member Korean team combined for 12 points compared to eight points for Japan at the three-day event held at the Passage Kinkai Island Golf Club in Nagasaki Prefecture since Friday.

Korea lost 6.5-3.5 in yesterday’s 10 single matches, but two wins in the first five single matches was enough to secure its overall victory.

Five points were up for grabs for each of the five alternate shot matches in the first-day competition and the five four-ball matches on the second day.

It was a back-to-back victory for Korea in the rivalry event that resumed in 2010 after a five-year hiatus. Korea won the inaugural event in 2004, lost the 2010 event and won in 2011. It is the first time Korea won in Japan. The previous three events were held in Korea.

Five of Korea’s best-known golfers, including Choi Kyung-joo and Yang Yong-eun, were absent, raising ysterday concern over the prospects for Korea maintaining its dominance at the Million Yard Cup.

Choi, an eight-time winner on the U.S. PGA Tour and Yang, a two-time PGA winner, were playing at the PGA Tour’s AT&T National in Bethesda, Maryland, along with two leading Korean players on the Japan Tour, Kim Kyung-tae and Bae Sang-moon.

Korea’s rookie prodigy Noh Seung-yul was entering the final round of the AT&T National, tied for second place with Tiger Woods and Bo Van Pelt.

“We were concerned at first about their absence, but we still kept our confidence as a team, whose members all have had experiences of winning,” said Cho Tae-woon, the captain of the Korean team, by phone from Japan after yesterday’s event. “We also had six players who are playing in the Japan Tour.”

Two players instrumental to the victory, however, were those playing in the Korean Tour, Cho said.

The pair of 31-year-olds also beat Toru Taniguchi-Hiroyuki Fujita pair in the first day’s foursome game and had a draw with the Ryo Ishikawa-Keichiro Fukabori pair in the second day’s four-ball match.

Also playing for Korea were Park Sang-hyun, 29, the runner-up on the money list on the 2011 Korean Tour, Kang Kyung-nam, 29, an eight-time winner on the Korean Tour, and Lee Dong-hwan, 25, a two-time champion on the Japan Tour.

The organizers said the event has helped to raise the profile and popularity of men’s golf in both countries, where women’s golf is seen as more popular.

More than 10,000 people attended over the three days of competition, according to the Korean Golf Tour, which co-organized the event with the Japan Golf Tour.

The two sides will meet within a month to discuss the details of the 2013 event, including the decision on whether to hold the event in Korea or Japan, according to an official of the Korea Golf Tour.