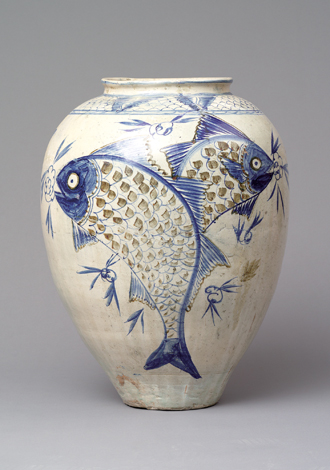 Fish symbolize both fertility and abundance.Provided by Bukchon Museum

One porcelain piece has a drawing of a big rooster. Another has a wrong Chinese character and a third reads, “Anybody who buys this will get rich.”

White porcelain from the Joseon era (1392-1910) has been associated with characters like “grace,” “elegance” and “sophistication.”

But the ones above are examples of Haeju porcelain made in Haeju, Hwanghae Province (in today’s North Korea) from the late 19th to early 20th century in the waning years of the Joseon Dynasty.

During that time, the porcelain production of the Joseon court diminished along with the dynasty. Demand, however, did not decline and artisans emerged in various regions to supply customers with works of porcelain in the Joseon court style. And Haeju porcelain was one of them.

Currently, a rare exhibition dedicated entirely to Haeju porcelain is under way in Seoul, creating quite a buzz among aficionados of ancient Korean art circuit. Haeju porcelain has generally been considered a “B-lister” in the art world, largely ignored by collectors and academics alike.

“Haeju porcelain uses the surface as a canvas and allows lively and free-flowing paintings,” said Lee Jeong-hee, a curator at the Bukchon Art Museum. “This is a completely different and independent from the typical, cliche patterns of court porcelain.”

The Haeju porcelain exhibition is a good fit for the Bukchon Art Museum, a young institution with a big ambitions.

It opened in May 2011 with the goal of promoting Korean art from a new perspective and bringing attention to unknown, obscure or unappreciated items.

The Haeju porcelain exhibition, which contains about 100 pieces, is the museum’s second; wood furniture was the subject of the first earlier this year.

Many of the items have nature themes, typical of most porcelain of the time. But their presentation is atypically easy-going, free and natural, bringing smiles to those who see them. 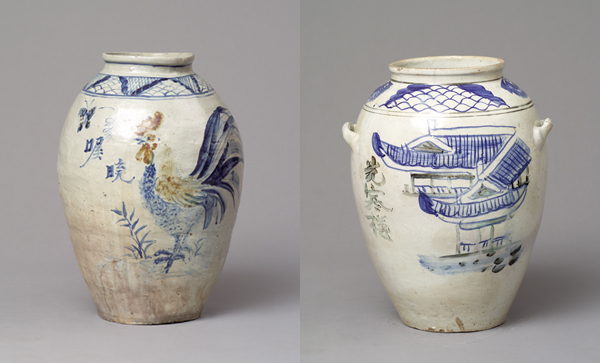 Left: Jar features roosters, one on the front and one on the back. Right: The famous Gwanghanru pavilion, with name misspelled. Provided by Bukchon Museum


A piece 80 centimeters (31 inches) high features two big fish, traditionally symbol of fertility or abundance. Another one features a pavilion called Gwanghanru in Namwon, North Jeolla, which was a famous tourist site of the time. But Gwanghanru is misspelled.

Officials of the Bukchon Art Museum point out that with Haeju porcelain, it is rare to see replication. “There are pieces that feature peonies, chrysanthemums and other flowers, but each is improvised depending on time, place and mood - they are all different,” Lee said.

According to Jeong Yang-mo, the former director of the National Museum of Art, it wasn’t until the 1990s that Haeju porcelain emerged in Korean art market.

“The pieces came from North Korea,” he says. “North Koreans sold them and through some channels they ended up in the South.”