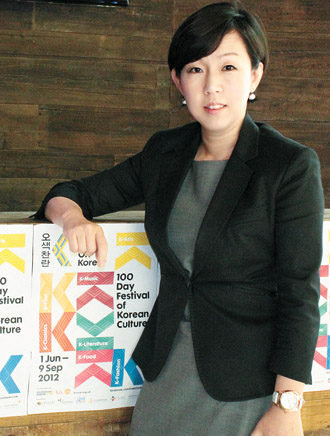 Jeon Hye-jung sees the 100-day “All Eyes on Korea” festival as a golden opportunity. “A cultural event like this around the much-anticipated Olympics season will gain much more traction,” she says. Provided by the Korean Cultural Center

Her display is part of “All Eyes on Korea,” a 100-day festival of culture.

The Ministry of Culture, Sports and Tourism of Korea will oversee the festival and it will be organized by the Korean Cultural Center, which has promoted Korean culture since 2006. Jeon Hye-jung, chief director of the 100-day event, is known for her successful management of the London Korean Film Festival, rated the best of 35 international film festivals that receive council support.

The JoongAng Ilbo talked with Jeon about a month before the start of the London Olympics.


Q. “All Eyes on Korea” has promoted “K-Culture” for the festival. How will that play out?

A. Violinist Sarah Chang [Young Joo Chang], soprano Sumi Jo and Pansori singer Lee Ja-ram are scheduled to perform at the Southbank Centre. Lie Sang-bong, a fashion designer, will hold a show with a Korean food reception at the Victoria and Albert Museum. Movies by 12 directors, including Im Kwon-taek, Lee Joon-ik and Lee Myung-se, will be shown and some directors have visited theaters across London. So we are trying to highlight a wide range of Korean culture. 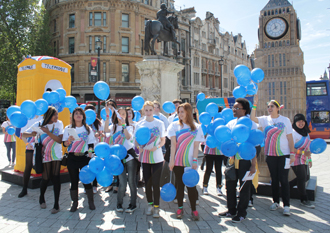 About a month before the start of the Olympics, some 50 Koreans and Britons gather in London to promote the “All Eyes on Korea” cultural festival that will run for 100 days. [YONHAP]

What distinguishes “All Eyes on Korea” from other festivals?

The Korea Cultural Center has established connections in the U.K. cultural sector. We know how to promote the culture of Korea. There are many unfortunate cases where performance groups - no matter how prominent they are - face trouble because they could not find a decent venue. We are cooperating with the Southbank Centre, Victoria and Albert Museum and Thames city office in charge of festivals. The art center and V&A are recognized both at home and abroad. Lie Sang-bong designed tea cups decorated with hangul [the Korean alphabet] that will be shown at the V&A. I cannot think of a better way to promote Korean culture.

How does that become possible?

The Hayward Gallery of the Southbank Centre and V&A boast jam-packed performance schedules. We have contacted and persuaded directors for two years. If we launch a cultural festival like this around the much-anticipated Olympics season, the event will gain much more traction. The network I developed during the London Korean Film Festival helped a lot. The increasing demand for Korean culture and excellence of Korean artists helped, too. I asked the director of the Hayward Gallery which artists he’d like to see most and he said Choi Jeong-hwa.

You’ve organized the London Korean Film Festival for seven years. What has been your goal?

Our principle is to introduce the culture in a way that attracts local attention. We focus more on native U.K. people than on Koreans living in the U.K. When we asked Britons which sector most interests them, they said movies, pop music and food. Koreans are most likely to think of more traditional themes.

How did you end up doing what you do?

I began learning Korean classical dance at age 8 and graduated from Sunhwa Arts High School and Ewha Womans University. Professor Kim Mae-ja taught me at the graduate school. After earning a master’s degree, I lectured and then decided to go abroad with my two children to study more seriously. I majored in business and cultural policy at the University of Warwick. I discovered that I loved arranging performance events during my college years. After finishing studies at Warwick, I served as a cultural adviser at the Korean Embassy in London, which help me get a position at the cultural center.

How popular is Korean culture in the U.K.?

It has just begun to get noticed. Korean music and movies are popular among young people. Movie director Park Chan-wook is widely recognized by people in the film industry. It seems many know Park even if they have no idea who Lee Myung-bak is.

I went to Oxford and Warwick for the movie festival several years ago and director Park made a visit, too. A man from Ireland suddenly took out a hammer from his bag. I felt threatened and wasn’t sure if I should throw myself at the man. But it turned out that he was a big fan of the movie “Oldboy” and impressed by a scene in which Choi Min-sik threatens the gangs with a claw hammer. K-pop is even more popular. The director of the V&A said his sister is a fan of K-pop. Things went smoothly thanks to that.

Where else have you seen enthusiasm in Korean culture?

A Blue House official visited the Korean Cultural Center. This is the first time I heard the word “K-pop.” I asked around if there is a dance club where only Korean music is played and finally found one. I was practically shocked by the club scene where people were trying to sing the Korean lyrics meaning “clap your hands” from songs by 2NE1 and Big Bang and dancing to the music. I started thinking about how to keep the phenomenon going strong. We set up a dance club that only plays K-pop and serves Coke and Korean snacks. We advertised it only through the Web site, but the seemingly endless line to get into the event showed how popular it was.

Don’t you think only K-pop and movies command popularity?

That is why we launched a three-month program called K-pop Academy in February. We gave a lecture on Korean culture to 30 selected students. The course was free but there was a string attached. Participating students should post a review of the class to get the word out about Korean culture. We let them make wormwood rice cake and ddukbokki [Korean snack] and taught them how to make a traditional bow. The ambassador showed them how to cauterize with wormwood-based moxa. A journalist from The Guardian who wrote a special report on K-pop spoke, too. She said she began to enjoy K-pop after listening to “One” by Epik High. She also tunes in to songs by Girls’ Generation, Big Bang and Beast.

What role can you play to sustain such attention?

We should keep cooperating with organizations similar to us and expand the connection in various fields. I’m sure “All Eyes on Korea” will be able to generate much more than 1.5 billion won [$1.3 million], the amount we’ve invested. I hope that one long-term effect will be a wider awareness of Korean culture. I also want to see more people in the U.K. pursue Korean studies and go to Korea to learn about the country firsthand. I think Korean culture is competitive with other cultures, and it just might come to the forefront sometime in the not-so-distant future.