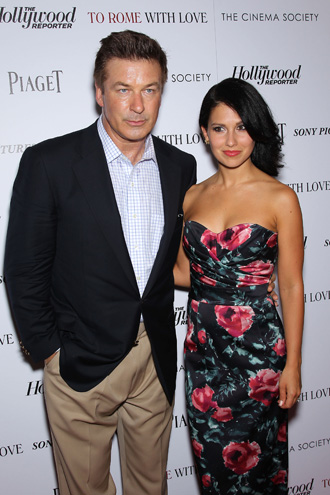 NEW YORK - Alec Baldwin and his yoga instructor fiancee tied the knot Saturday in a New York City church, with a guest list that included family and famous Hollywood pals.

Thomas wore a silk magnolia Amsale gown with cap sleeves and a keyhole back neckline accented with crystal buttons. Baldwin’s suit was designed by Tom Ford.

The two began dating last year and were engaged in April. Baldwin was previously married to actress Kim Basinger; they have a daughter, Ireland, who attended the wedding Saturday in a slate silk chiffon gown also designed by Amsale.

The reception was held at New York University’s Kimmel Center.

The “Rock of Ages’’ actor warmly received congratulations from well-wishing fans on his way in for the service, said his friend and publicist, Matthew Hiltzik.

The wedding came about a week after Baldwin and a news photographer got into a scuffle outside a courthouse where the actor was believed to have picked up a marriage license. Baldwin and the photographer traded barbs over who shoved whom; no arrests were made.