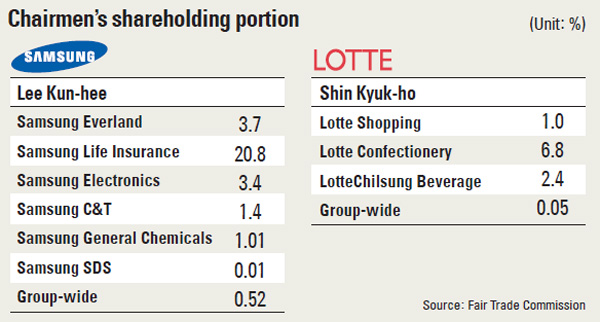 Transparency in corporate shareholding structures at key conglomerates has not noticeably improved in Korea, the country’s first government-written report on the issue showed yesterday.

The Fair Trade Commission said yesterday that although the heads of the 10 top conglomerates hold less than a 1 percent stake in their groups, the practice of cross shareholding within groups continues. That leaves room for large businesses to continue unfair trade practices against smaller ones in the corporate sector.

The antitrust agency also unveiled an infographic on the shareholding structures of 65 companies in the country and said it found the chairmen of top conglomerates hold a 0.94 percent stake in their groups on average, the lowest level in history.

This comes as a result of chairmen being under constant pressure to lower their stakes.

Since 2000 until last year, the figures have stayed in the 1 percent range.

Also, the percentage of shares purchased by family members of the owners also slid 0.2 percentage points from a year ago to 3 percent.

In the report, the FTC divided 63 groups into two: 43 that have chairmen and the remaining 20 without a top leader such as KT, Posco and Daewoo Shipbuilding & Marine Engineering.

The chiefs of 43 groups, including the 10 biggest, hold a 2.13 percent stake on average, the report found. For instance, Chairman Lee Kun-hee of Samsung Group, Korea’s No. 1 conglomerate by asset, holds a 0.52 percent stake in the group. The head of the nation’s third-largest SK Group, Chairman Chey Tae-won, owns 0.04 percent of shares in the group. Chairman Shin Kyuk-ho of Lotte Group holds a 0.05 percent share, according to the report.

“It is natural that the owners’ private assets are limited, but their companies are expanding in size,” said Chung Joong-won, a director general of the FTC.

Although the owners and their families are holding fewer shares in their groups than before, the percentage of subsidiaries holding shares in other subsidiaries within one group rose 2.5 percent to reach 52.77 percent.

“This means that despite lower shareholding rates of the chiefs, their dominance across the groups has expanded,” said Kim Sang-taek, economics professor at Ewha Womans University.

Among the 63 groups investigated by the FTC, 29 that haven’t adopted the holding company system had complicated relations among the owners’ families and subsidiaries in terms of shareholding.

On the other hand, 12 public institutions without owners are found to have the simplest shareholding structures, the report found.

“The authority will press conglomerates to disclose confidential information about shareholding percentages in order to make them improve their asset ownership structures,” Chung said.