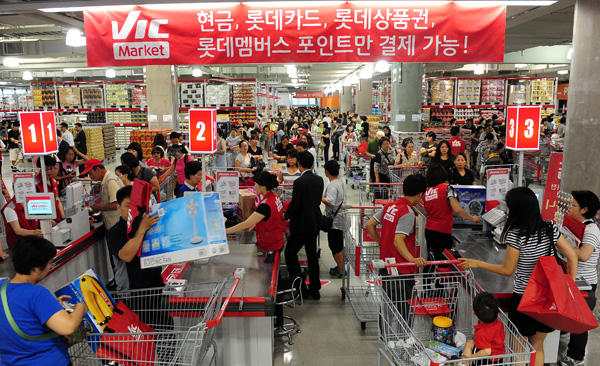 Shinsegae Group is also ramping up its efforts to woo customers as it vies with Lotte Group for supremacy in the retail industry amid shrinking demand and more stringent business regulations. 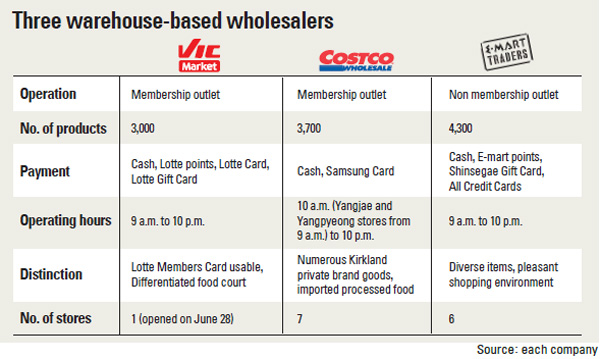 Now competition is likely to heat up, with Lotte and Costco potentially governing a duopoly market. Unlike other supermarkets, customers at VIC Market will have to pay an annual fee of either 30,000 won ($26.01) for regular members or 35,000 won for business clients - the same as at Costco. In return for this fee and no-frills stores, they can enjoy cheaper prices.

Lotte said it will differentiate its stores based on a deeper understanding of what Korean shoppers want and expect in terms of convenience and customer service.

“Lotte will attract local customers with affordable membership fees and more family-oriented services, as well as popular global brands at extremely low prices,” said an employee of the company.

Lotte opened its first store for early subscribers on a trial basis from Monday to Wednesday to examine its operational smoothness and iron out kinks.

With the same operating hours and membership fees as Costco, VIC Market will display 3,000 products. Of these, one-third will be popular global brands imported from 45 countries.

But it remains to be seen whether the Seoul store, located just 5.5 kilometers (3.4 miles) from Costco’s outlet in Yangpyeong, Yeongdeungpo District in southwestern Seoul, will end Costco’s monopoly in this retail segment.

“Lotte will provide new value to customers with products and prices that are not available at conventional supermarkets,” said Choi Choon-seok, director of Lotte Mart’s product division.

In anticipation of the move, Costco began cutting the prices of some of its top-selling products, such as Chilsung Cider and Shin Ramyun this week. Lotte responded yesterday by chopping 10 won off the same products.

Lotte plans to make all of its prices 10 percent to 30 percent cheaper than conventional supermarkets, according to an employee who requested anonymity.

At VIC Mart, customers can make purchases using either their Lotte Card - a credit card issued by the retailer - or cash. They can accumulate points using the card and redeem these at any Lotte Group subsidiary, including Lotte department stores, Lotteria fast food outlets and Lotte World, a recreation complex in Seoul that houses a theme park.

Better service is seen as the key to success for Lotte as Costco has been under fire for its unfriendly policies. Members and business clients have repeatedly complained that it only accepts credit cards issued by Samsung Card.

“The biggest difference between Lotte’s VIC Market and Costco is our improvement in services and facilities,” said Kim Min-seok, head of Lotte’s public relations division.

Meanwhile, Shinsegae department store is introducing its S-Wallet payment system today, an electronic wallet embedded in smartphones, for the first time among domestic retailers. Thanks to Near Field Communication (NFC) technology, shoppers can pay for goods by swiping their phone against a card reader after installing the S-Wallet app. An extra benefit is the option to redeem the points they amass as cash.

Companies in the communications and financial industries have been jumping on this new payment method in the last six months after Google launched Google Wallet in November. However, Shinsegae’s move marks a first among retailers.

It said on Tuesday it will expand S-Wallet to all of its department stores nationwide, as well as its E-mart outlets, this year. The payment system will be upgraded later this year to cover other costs, such as gift cards, discount coupons and parking fees, it added.

Although only currently available on Android phones, the app will be modified to also be compatible with iPhones and other carriers and credit card issuers brought in as partners, Shinsegae said, adding that it expects to see a jump in customers and sales.

“The success of the E-wallet system depends on how broadly usable it becomes. But we think the service will become a global success story in the retail industry, where credit card usage is extremely high,” said Kim Koon-sun, vice president of Shinsegae’s management support division.

Shinsegae developed the technology as part of a project led by the Ministry of Knowledge Economy.

The retailer is holding a series of events to celebrate the launch of the service until the end of next month.