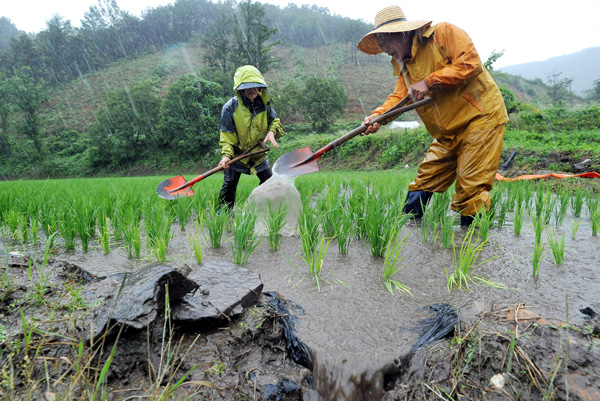 
Long-awaited rain finally fell across the country over the weekend, easing worries about the worst drought the country has faced in a century.

The Korea Meteorological Administration said Seoul, Gyeonggi and western coastal areas in northern South Chungcheong had 80-130 millimeters (3.14-5.11 inches) of rain during the weekend.

Seosan and Taean in South Chungcheong, whose farmland has been severely suffering from the protracted dry spell, saw a sign of relief as more than 100 millimeters of rain fell in the two towns.

The size of the drought-stricken areas in the country has been reduced to 132 hectares (326 acres) from a record 19,700 hectares on June 7.

Water levels at the country’s reservoirs reached 42 percent of capacity, easing concerns about irrigating farms in the country, though it falls short of the average of 69 percent during a normal year.

The weather service said the country’s southern regions and Jeju Island will have rain early this week, as it expects the monsoonal front to form there, raising expectations drought damage in the region will be alleviated.

South Jeolla and South Gyeongsang will likely experience the seasonal rain by Thursday, followed by North Jeolla the next day. The central region and Seoul, however, are not forecast to have more rain until Saturday.

The National Emergency Management Agency said the rainfall over the weekend has helped relieve 90 percent of the prolonged drought. The rainfall recorded nationwide over the weekend marks the first precipitation of more than 20 millimeters in the country since April 25.