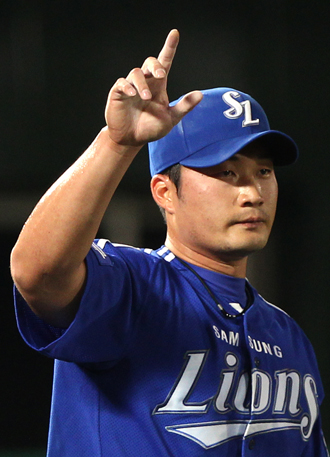 Four teams passed on Oh Seung-hwan in the 2005 pitcher’s draft. An elbow injury at Dankook University made the first four clubs skeptical, and he fell down to the Samsung Lions. Seven years later, these managers can only think: What if?

On Sunday, the Lions pitcher broke the record for the most saves in KBO history with 228, surpassing former LG Twins pitcher Kim Yong-soo.

“There were hundreds of calls to my cellphone from early in the morning, many of which I tried to dismiss in order to sleep and rest,” Oh said yesterday by telephone on his team bus moving from the Lions’ turf in Daegu to Seoul for this weekend’s series.

“I feel grateful for the public’s interest in me. I feel good.”

At Sunday’s match in Daegu against the Nexen Heroes, Oh closed the ninth inning allowing one hit but maintaining Samsung’s 3-1 lead to earn the save. He struck out two.

This display of solid pitching in the ninth inning has become expected of Oh, nicknamed the Stone Buddha, as he has closed games on the biggest of stages. He’s thrown the final pitch in the Korean Series and stood on the mound at the World Baseball Classic.

“His pitching is great and so is his managing of his own physical condition,” Kim, 52, said by phone yesterday.

Kim said the early years of the KBO, which was launched in 1982, required pitchers to be versatile and, unlike pitchers these days, they had to pitch many times as starters.

Still, he said he had no hard feelings seeing his record broken, saying every record was “supposed to be broken.”

Kim did say, however, that he thinks Oh’s record is unlikely to ever be broken.

“I doubt a pitcher that can match him could ever come out in Korean baseball,” he said.

Oh made his KBO debut in 2005 and recorded 16 saves. The next season, Oh saved 47 games, setting a single-season record not only in the local league, but for every league across Asia. The record remains unbroken to this day.

He came back solid last year with another 47 saves, contributing to the Lions’ fourth KBO championship title. Oh was named the Korean Series MVP last year. This year, Oh has recorded 16 saves.

Given his pace, many local baseball observers expect him to reach 400 career saves before he retires. The record in the Major League is 608 saves, held by Mariano Rivera, 42, of the New York Yankees.

The equivalent record for Nippon Professional Baseball in Japan is 338 saves, held by Hitoki Iwase, 37.

Lim Chang-yong, 36, a Korean pitcher playing for the Yakult Swallows in Japan, is only four saves shy of the 300-mark, although he recorded 128 of them in Japan.

Lim is known as one of the fastest side-armed pitchers in baseball with a 99.5 mile-per-hour fastball.

Oh said that he does not have a specific number of saves in mind that he wants to reach by the time he retires.

Just as his job is to close a game well, Oh said he’s focused on closing out his career on a positive note.

“I want to become a long-running pitcher who can play as long as I want, my team wants and my fans want,” he said.