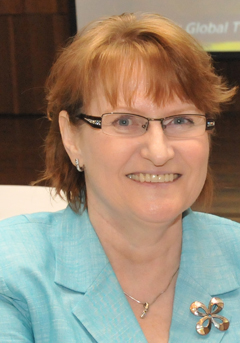 Some 500 guests, including government officials and diplomats, attended the Belarus National Day celebration at Seoul’s Shilla Hotel on Thursday.

“Due to its geopolitical relationship between Western Europe and Russia, Belarus has never invaded another country since its history.”

Instead, the minister cited that Belarus has endured the tragedy of invasion, losing a third of its population during World War II.

“Belarusian history of facing hardship is surprisingly similar to our own.”

Ambassador Natallia Zhylevich said in her welcoming speech that this year marks the 20th anniversary since the establishment of diplomatic relations between the two countries and 15 years since the Embassy of Belarus opened in Seoul.

Now ten months into her incumbency, the ambassador said there is a bilateral trade of $200 million and “dozens of joint projects in science and technology, over a hundred students’ exchanges every year and a very dynamic cultural dialogue.”

The ambassador said to the Korea JoongAng Daily, “The significance of our National Day is not just the day of our independence but a celebration of when we were liberated from occupation, and people come out to the streets to celebrate. People also buy flowers to pay tribute to those fallen at memorials. It’s also a popular wedding day.”

The Belarusian National Day is today and observes the independence day of the country. The country declared independence in 1991 after the collapse of the Union of Soviet Socialist Republics.