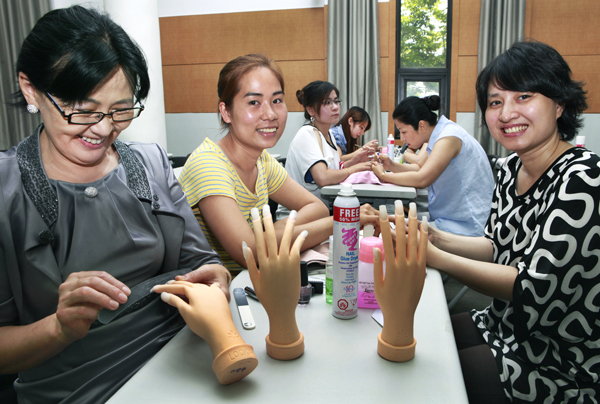 Married immigrant women take lessons to become certified nail artists at the Seoul Jungbu Women Development Center in Mapo District, western Seoul, on June 20. For many, becoming a manicurist would be their first step to having a steady job here. By Park Sang-moon


My Tien Tran, a 24-year-old woman from Vietnam, moved to Seoul three years ago after marrying a Korean man.

She is one of the 20 students enrolled in the manicure and eyelash extensions certification class at the Seoul Jungbu Women Development Center in Mapo District, western Seoul, one of the new classes offered for married foreign women at the center sponsored by the Seoul city government.

Students are in their 20s to 40s and are comprised of women from Vietnam, Mongolia, China, Russia and Ethiopia.

Some 49,000 married migrant women live in Seoul. Of these, 67.2 percent live in a household earning a monthly wage of less than 2 million won ($1,748) a month, said the city government.

The Seoul Metropolitan Government stated Sunday that there were 140,000 married immigrants living in Seoul as of end of last year. The number was expected to grow to 440,000 by 2030.

The Seoul government stated in May that it will provide 434 million won to help support married immigrant women develop skills to find employment.

The city government stated through this program it will provide lessons to train some 300 women in Guro and Seodaemun districts over the summer months to become manicurists, beauticians, Chinese tutors or even community center counselors.

Because there were an odd number of students in class that day, a Korea JoongAng Daily reporter stepped in as a hand model on June 20 as Tran spoke of her life adjusting to married life in Seoul.

“I’ve always been interested in design and nail art, so I enjoy learning all the different techniques, though I’m always worried about being late for class,” she said. Tran has a 3-year-old daughter whom she takes to day care each morning.

After class ends, she rushes to do groceries, pick up her daughter, and then prepare dinner.

And learning to become a nail artist is not about simply being able to paint colors on nails. The lesson du jour of the nail art class was “silk nail extensions.”

“I practice until 1 a.m. each night and my husband gets annoyed,” she admitted, expertly buffing the nails then snipping a piece of sheer silk gauze to fit over the thumbnail. The silk gauze, layered with glue and powder, form a faux nail that can be shaped by a nail file for a more natural alternative to acrylic nails.

“I can only do it late at night after I put my daughter to bed at 10 p.m. or else she gets curious and touches my kit.”

“It’s my dream to open up a nail shop,” Tran said.

“And my husband told me I can do what I want to do.” She has not had any job opportunities for the past three years while raising her child.

“I’m going to paint the nail a popular color - coral orange. And look, you can’t even tell it’s not real,” she added, with briskness and accuracy in her strokes.

Unfamiliar terms like “maintaining a C-curve” and “finding high-points” and “keep the transparency” are tossed out by their instructor who makes the rounds around the class and gives feedback to each student.

The nail examination is set for the end of August after a total of 114 hours of lesson, where these women will need to take both a written and practical exam to receive their certification.

Employing these women is a big target, said Park Sun-hee, a beautician instructor and lesson organizer at the center. This is the first time the center has offered nail art classes for immigrant women.

“Some come in with unrealistic expectations about the salary of a nail artist,” admitted Park.

“But we try to emphasize that at least for the first year, the yearly salary can be between 700,000 to one million won. The wages can grow with several years of experience to somewhere between 2 to 2.3 million won in the next couple of years.”

“The center does not simply focus on the practical aspects, but dedicates 30 hours of total class time to lecturing on the importance of skills needed for employment including writing a resume, etiquette, interview techniques and presentation, which are very important in the service industry,” said Park.

Ban Jae-hee, the chairman of the international Korea Nail Design Association and the class instructor said, “This is my first time teaching a multicultural class like this. But even running a nail shop, I have received a lot of clients from different countries, and I picked up a basic greeting in each language. The students who are more fluent in Korean help out those who aren’t.”

Thus, Ban infuses English terminology, makes sure to use the white board and write down key concepts, and speaks slowly and articulately, repeating main themes, so that her class can understand.

“Sometimes the students find it hard to concentrate because of their family situations, but they are determined to learn,” said Ban.

Another Vietnamese woman, Kim Thao Phan, 27, came to class the previous day even though her 6-year-old daughter was running a high fever. The center has a child care room. One of the employees of the center took Phan and her daughter to a nearby hospital.

But Phan came in late in the middle of class the following day, as soon as her daughter’s fever quelled, stating, “I’m worried about falling behind.”