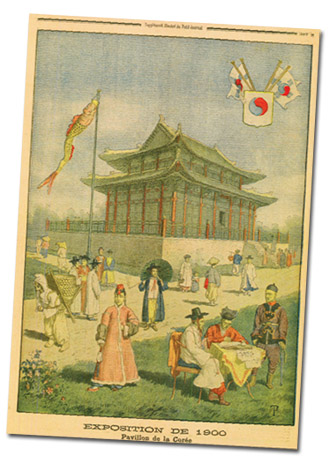 An illustration of the Korean pavilion at the 1900 Paris exposition.

“I was born in the darkness and went into a ray of hope.”

By “ray of hope,” Min was referring to his 1883 trip to the American Exhibition of the Products, Arts and Manufactures of Foreign Nations in Boston, Massachusetts.

Min was at the forefront of the Gaehwa enlightenment movement, which sought to make Joseon a stronger state by adopting foreign ideas. He was also part of an 11-member delegation called Bobingsa that King Gojong (1852-1919) sent to the United States in 1883 after establishing diplomatic relations in 1882.

For Min and other policy makers of the time, the exhibition was a chance to experience the different cultures and advanced industry of other countries and to let the world know that the “hermit kingdom” (a nickname given to Joseon by foreigners) had a lot to offer, too.

Min was so inspired that he attempted, unsuccessfully, to hold a similar international exposition in Joseon the following year.

It was not until 1893, 10 years after Min was in Boston, that Korea officially took part in an international exposition: the World’s Columbian Exposition, Chicago, held to celebrate the 400th anniversary of Christopher Columbus’ discovery of the New World.

Korea was one 47 countries that took part in the Chicago World’s fair, which began in May and ran for six months.

And now - 119 years later - Korea is hosting its own international exposition, Expo 2012 Yeosu Korea. The expo kicked off on May 12 in the southern port city of Yeosu and is in full swing.

To fully appreciate Expo 2012, it helps to know something about how Korea began to participate in international expositions. 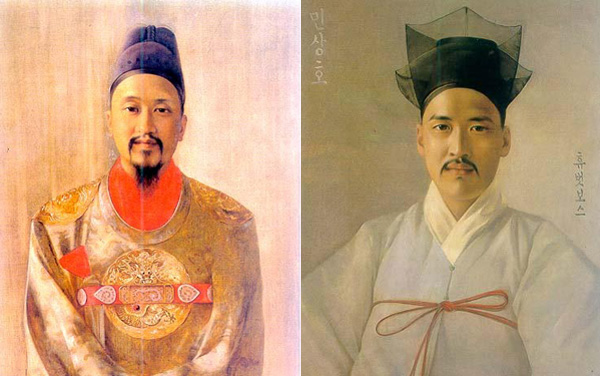 Portraits of King Gojong and Joseon official Min Sang-ho by Dutch artist Hubert Vos were displayed in the U.S. pavilion in Paris.

In May 1891, Korea received an official invitation from the organizers of the World’s Columbian Exposition, Chicago, to participate in the event.

According to “Korea’s Modern Exposition,” by Lee Gak-gyu, King Gojong had visited the Vienna World Exposition in 1873, where the participation of Japan ignited “Japonism” fever in Europe.

So the king accepted the Chicago offer with high hopes of changing Korea’s image overseas that had been associated with words like “isolated,” “reclusive” and “hermit.”

By January 1893, Gojong had appointed officials in charge of exhibits - including Jeong Gyeong-won - and the next month the officials, an interpreter, singers and musicians left for the United States. Horace Newton Allen (1858-1932), an American diplomat, missionary and physician, also accompanied them.

Korea participated in such a global event despite tumultuous domestic circumstances, as Japan’s encroachment was hastening the collapse of the Joseon Dynasty.

Korea’s presence in Chicago was small, but its exhibit raised some eyebrows.

The Korean section, located in the southern part of the Manufactures and Liberal Arts Building, measured just 899 square feet (83.5 square meters). By comparison, China’s exhibit covered 6,390 square feet and Japan’s 39,542, according to Kim Young-na, art history professor at Seoul National University and the director at the National Museum of Korea. She wrote a dissertation in 2000 about Korea’s exhibits in the Chicago World’s Fair.

While international expositions at that time were mostly about countries promoting their advances in industry and technology, most of Korea’s exhibits consisted of daily necessities like tables, folding screens, palanquins and handicraft items, such as wardrobes, shoes and ceramics.

According to the list of exhibits acquired by Kim, Korea displayed 187 items in eight categories, but none in the categories of machinery, electricity or livestock. 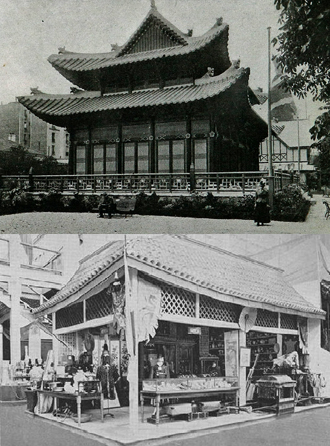 Top: A photo of the Korean pavilion. Provided by Expo 2012. Above: The Korean section of the World’s Columbian Exposition in 1893, Korea’s first appearance at an international exposition.

As can be seen in a snapshot of the Korean section (bottom right), Korea’s presentation was not at all sophisticated and reception by visitors was correspondingly cool.

“[The Corean King] hastily knocked together a rather inexpensive collection of Corean junk and shipped it off to Chicago,” wrote John Cockerill, in an article titled “Scenes from the Hermit Kingdom” in the Dec. 22, 1895, edition of the New York Herald.

“Above the building were the flags of all the countries participating in the exposition. Only absent of the flag of Joseon,” Yoon said in his journal. “I went to the Joseon exhibit at eleven in the morning and stayed until five in the afternoon. I couldn’t take my eyes off the wretchedness of my country.”

But some did take note of rare goods, particularly the ceramics.

John J. Flinn, who published the 1893 “Official Guide to the World’s Columbian Exposition, Chicago,” said in his book there were rumors that the Korean section would display attractive and precious ceramics.

Also, Hubert Howe Bancroft, who in 1894 wrote “The Book of the Fair, an Historical and Descriptive Presentation of the World’s Science, Art and Industry, as Viewed Through the Columbian Exposition at Chicago in 1893,” said the Korean section looked like a toy and the items were strange ones that represented the little-known traditions of a country with a closed-door policy.

But he noted that it was the Koreans who taught the Japanese how to make ceramics and the technology of ceramic making was passed down through generations in Korea. He added that Koreans considered ginseng as precious as gold and that tiger skin was an important export.

Korea’s next appearance at an international exposition was seven years later: The Exposition Universelle in Paris in 1900.

But during that seven-year period, the 500-year-old Joseon dynasty had collapsed.

Gojong’s wife, Queen Min, was killed by Japanese assassins in 1895. Fearing for his life, Gojong fled and took refuge in the Russian legation the following year. In hopes of better days and more independence from foreign powers, Gojong declared the Korean Empire in 1897. The empire would last only until 1910.

Korea’s participation in the Paris exposition was intended to promote the new Korean Empire.

“It’s an early version of publicity of Korea as a brand,” said Lee Gak-gyu. “Through it, Gojong sought two things: national prosperity and industrial development.” Lee said he considers Korea’s participation in the Paris exposition more significant than its presence at the Chicago World’s Fair in terms of Korean history, not only because it came during the Korean Empire but also because Korea built an independent pavilion.

To prepare for it, the Korean Empire set up a special office for the Korean exhibits in the Paris exposition, appointed one Baron Delort de Gleon to plan it and secured increased financial support from France in 1898, according to Lee’s book.

But with Gleon’s sudden death in 1899, Korea’s participation in the Paris exposition became unclear.

Gojong sent a delegation to show that Korea remained determined to be part of the event and construct a pavilion, although on a smaller scale than Gleon had planned.

According to records, the Korea pavilion was similar in shape to Geunjeongjeon, the main throne hall of Korea’s ancient palaces.

“The entire structure is made of wood and covered in bright colors. In particular the edges of the eaves that soar toward the sky and the big roof - which are features of East Asian structures - have attracted many visitors,” read a article in Le Petit Journal.

Korean historians note that Korea displayed about 59 items in 13 categories. As was the case at the Chicago World’s Fair, most of them were handicraft goods. However, the display technique had been noticeably upgraded. For example, mannequins were used display wardrobes and there were architectural models.

More importantly, the Korean exhibits were better received than at the Chicago fair.

F. Faideau wrote in Le Petit Journal: “A precious collection sent by the king himself, as well as items owned by the French people who had lived in Korea, were sophistically displayed. They leave a strong impression in general on Korean resources and industries,” he said.

According to articles in Le Petit Journal, Korea displayed various types of grain that it exported to Japan as well as fabrics, leather, official and ceremonial wardrobes, weapons and accessories.

“I saw hair bands, jewelry, necklaces, charms, broaches and other accessories like many kinds of hairbrushes … Another stand is full of beautiful ceramics. If you believe in traditions you know that it is Koreans that invented ceramics,” Faideau said.

The articles also talk about smoking, saying the higher the rank of the smoker, the longer the pipe; ancient Korean books, saying Korea’s woodblock printing goes far back in time and was widely distributed from the ninth century; and various shapes of shoes and hats, “which neither China nor Japan can emulate,” that inspired French merchants to develop new products.

“Europe tried to treat this country as a barbarian,” Maurice Courant (1865-1935) is quoted as saying. He came to Korea in 1890 as an interpreter and secretary for the French legation that supported Korea’s participation in the 1900 Exposition Universelle in Paris.

“Korea’s exhibits included fabric born from much endurance and painstaking works. There must be a bright future for a country that makes such elegant silk and this is also a hint of a continuous prosperity of Joseon,” Courant said.