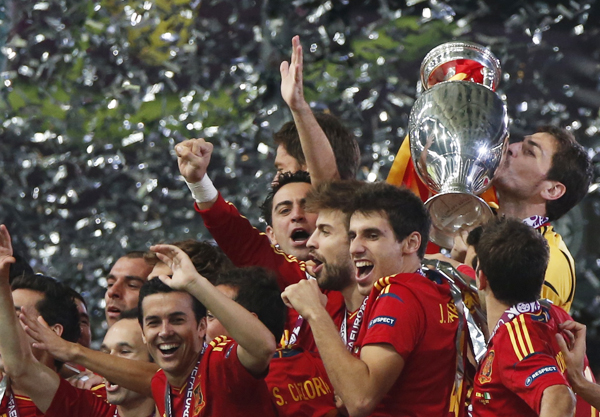 Spain’s Iker Casillas kisses the trophy after defeating Italy to win the Euro 2012 final football match at the Olympic stadium in Kiev, Ukraine, on Sunday. [REUTERS/YONHAP]

But, incredibly, they also managed to score a whopping four goals, something they don’t usually do.

It all added up to a 4-0 win over Italy and a third straight major soccer title for Spain.

“We won being true to our playing style, and by moving the ball the way we moved it, we knew how to take charge of the match,” said Spain goalkeeper Iker Casillas, the team’s captain. “What we do is difficult but we make it look easy.”

Casillas and Spain striker Fernando Torres also made their own histories. Torres became the first man to score in two European Championship finals, and Casillas played in his record 100th victory in international soccer.

Spain’s other goals on Sunday at the Olympic Stadium came from David Silva, Jordi Alba and Juan Mata.

“We were superior to Italy,” said midfielder Xavi Hernandez, perhaps Spain’s most influential player over the last four years. “We played a complete game and perhaps the best of the entire European Championship. We made history.”

Four years ago at Euro 2008, Spain ended a 44-year drought of major titles, beating Germany 1-0 in the final to start a run that has been unmatched by any other team in history.

Although they lost to the United States in the semifinals of the Confederations Cup in 2009, snapping a record, 15-game winning streak, the Spanish have been nearly impossible to beat in competitive matches.

A year after that game against the Americans, Spain opened the 2010 World Cup with a loss to Switzerland. But they then went on a tear, winning their next six games to finally claim a World Cup title and undoubtedly shed for good the “underachiever” tag.

In all that time since Euro 2008, Spain has won with flair, using its short passing game - dubbed “tiki taka” by the Spanish media and adopted by the team - to dazzle scrambling opponents.

“Tonight, there was no contest,” Italy goalkeeper Gianluigi Buffon said. “They were too superior, so the bitterness at losing this final is only relative.”

Against Italy, Spain was the favorite, but was also primed to be beaten after being held to a 1-1 draw by the Italians in their opening Group C match. Spain, which has been experimenting with a lineup that excludes a recognized striker, needed a penalty shootout to reach the final after a 0-0 tie with Portugal in the semifinals.

“They’ve been playing at a very high level for years,” Italy coach Cesare Prandelli said. “And even though they didn’t use any traditional striker, they were able to give weight to their attack.”

The controversial lineup, which Spain coach Vicente del Bosque again employed on Sunday, is akin to playing in the Super Bowl without a running back. Sure, you can still score touchdowns, but you give up on the chance for a game-breaking play.

Still, the midfielders and the defenders got the job done in the first half. Silva headed in a high shot in the 14th minute off a pass from Cesc Fabregas. Alba added another in the 41st, picking up a beautiful through ball from Xavi and shooting past Buffon.

“The game was ours after the first goal, but the truth is that we played one heck of a game,” Fabregas said.

Italy’s task was tough enough with 11 players, and it became impossible with only 10 after the 64th minute. All its substitutes were used when midfielder Thiago Motta, who had only been on the field for seven minutes, was taken off with an injury.

Torres, who came on for Fabregas in the 75th minute, then added the third goal with a relatively easy finish and Mata really put the game away in the 88th, knocking in a pass from Torres.

“The second goal by Jordi hurt them, and then the third finished them off,” said Casillas, who made a point-blank save on a shot from Antonio Di Natale. AP