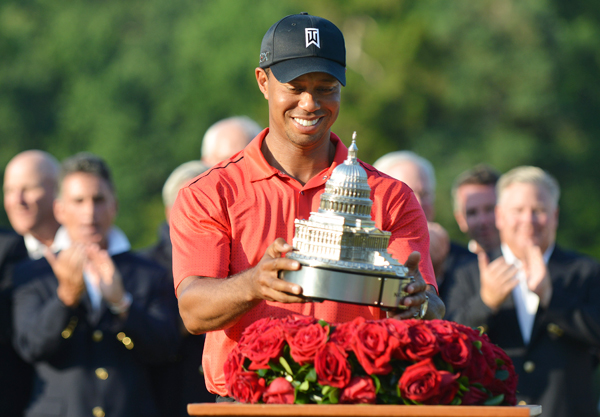 Tiger Woods picks up the trophy after winning the AT&T National at Congressional Country Club in Bethesda, Maryland, on Sunday. Tiger won with 8-under for a four-day total of 276. [UPI/YONHAP]


BETHESDA, Maryland - Congressional reopened its gates Sunday to thousands of spectators who got what they expected in the AT&T National - another win by Tiger Woods.

Caught in a tense duel with Bo Van Pelt on another sweltering day, it looked as though Woods blinked first until Van Pelt matched him with mistakes of his own. Woods closed with a 2-under 69 and won by two shots when Van Pelt finished with his third straight bogey and had to settle for a 71.

Brendon de Jonge of Zimbabwe, who had a one-shot lead going into the final round, didn’t make birdie and closed with a 77.

Adam Scott went out in 31 and was briefly tied for the lead until a few bogeys on the back nine. He had to settle for a 67, which put him alone in third at 5 under.

Billy Hurley, the Annapolis graduate who spent five years in the Navy, closed with a 72 and tied for fourth along with Robert Garrigus (70), Jhonattan Vegas (71) and Noh Seung-yul of Korea, who had a 73.

Woods won for the third time this year, the most of anyone on the PGA Tour, and it was the 74th win of his career. That moved him past Jack Nicklaus into second place on the tour list, eight short of the record set by Sam Snead.

Woods, who finished at 8-under 276, moved to the top of the PGA Tour money list and the FedEx Cup standings for the first time since September 2009.

He effectively clinched the win with a 9-iron down the hill toward the peninsula green on the 18th, a shot so pure that Woods started walking and twirled the club moments after he made contact.

And so ended a wild week in Washington - record heat Friday, followed by a wind storm that topped dozens of trees at Congressional and forced the tournament to keep spectators out Saturday. They were back in force for the final round, and they were treated to some pretty good theater.

“What an incredible week,” said Woods, the host of the AT&T National and a winner for the second straight time it has come to Congressional. “Everybody, thank you for being patient with us. Yesterday was a silent day. I think everyone saved up for today. What an atmosphere to play in front of.”

There wasn’t much to cheer in the final hour except for the 15th hole, when Woods holed a 20-foot birdie putt that crawled into the front of the cup, and Van Pelt matched that birdie with a 10-footer as the pressure was building.

Van Pelt had him on the ropes on the par-5 16th by ripping a 345-yard tee shot and having only a 6-iron into the green. Woods hit a spectator in the left rough with his tee shot, laid up, and then attacked a back flag only to see the ball tumble over the green and down an 8-foot slope.

Woods remains at No. 4 in the world, though this win at least gives him a mathematical chance to get back to No. 1 at the final two majors of the year. AP