Samsung expected to have reached \50T in Q2 sales

Samsung expected to have reached \50T in Q2 sales 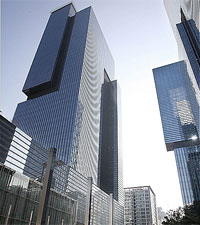 Samsung is likely to be the only conglomerate successfully weathering the global economic storm given its strong showing in the second quarter, according to financial information group FN Guide.

The report said Samsung Group’s operating profits in the first six months of this year are estimated to have grown 65 percent from a year earlier to 14.7 trillion won ($12.8 billion).

Samsung Group’s exceptionally strong performance has been led by Samsung Electronics. The leading electronics company continues to top the global smartphone market, while its LED TV sales continue to grow as well.

Samsung Electronics is expected to surpass its sales record that was set in the first three months of this year. In the first quarter, the company’s sales reached 45.3 trillion won. In the second quarter, sales are expected to have grown to 50.2 trillion won, which would be a new record.

Hyundai Motor Group is expected to have seen limited growth in the first half. Operating profits are expected to have increased 14.2 percent to 9.9 trillion won while sales and net profits will likely see double-digit growth of 10.5 percent and 13.1 percent, respectively.

Other leading conglomerates are expected to have suffered in the first half.

FN Guide projected that although Samsung is likely to continue its positive performance in the second half, Hyundai Motor Group is likely to feel the pinch of the downsizing global market.