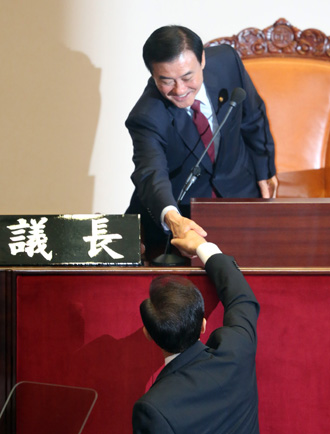 The National Assembly yesterday elected its new speaker and held an opening ceremony to begin the 19th term of the legislature with 300 lawmakers.

Representative Kang Chang-hee, a six-term lawmaker of the Saenuri Party, was elected as the National Assembly speaker yesterday morning to head the legislature for the first half of the lawmakers’ four-year term.

Representative Lee Byung-suk of the Saenuri Party and Representative Park Byeong-seug of the Democratic United Party, both four-term lawmakers, were elected as deputy speakers.

In his opening remarks, Kang urged lawmakers to serve the people for four years by giving up their privileges while continuing their hard work and sacrifice.

After his election, Kang gave up his Saenuri Party membership under the National Assembly Act, and the ruling party now occupies 149 out of the 300 seats in the legislature. Of the 283 lawmakers who participated in the election, in which Kang was the sole candidate, 195 voted for him.

Known as a key member of Park Geun-hye loyalists, Kang joined politics in 1980 under the Chun Doo Hwan regime. After serving five terms, he stayed away from politics for eight years but made a comeback this year by winning his sixth term in Daejeon in April. He also served as the minister of science and technology in the Kim Dae-jung government.

President Lee Myung-bak also attended the opening ceremony of the legislature and gave a speech. In the address, titled “Going beyond the crisis, preparing for a new international order,” Lee stressed the importance of cooperation between the administration and the legislature. While Lee’s speech was largely focused on the government’s past achievements and key projects in the future, Lee made no specific mention of the latest incidents surrounding him.

Last week, the ruling and opposition parties agreed to appoint an independent counsel to investigate the suspected irregularities involving the now-scrapped project of Lee’s retirement home. The National Assembly has also vowed to hold an investigation to look into the Blue House’s role in the illegal surveillance scandal.

The Blue House was also under fire over having made an attempt to rush the passage of a military pact with Japan. Facing public protests, Seoul made a last-minute call to postpone it.

“Humbly looking back on my successes and shortcomings thus far, I will faithfully uphold the will of the people and do what I can to the best of my abilities in steering state affairs to my last day in office,” Lee said. “In so doing, I promise I will actively communicate with the National Assembly and continue to seek its cooperation.”

He also promised that the government will manage the presidential election in December “fairly with a historic sense of responsibility.”

It was Lee’s first speech at the National Assembly in four years. In 2008, he gave two addresses - one in July to mark the opening of the legislature and one in October to give a budget speech. During his last address, some opposition liberal lawmakers walked out before it ended.

The lawmakers appeared to be unresponsive yesterday as not a single round of applause was given during Lee’s address.

While the National Assembly managed to open its doors after weeks of political deadlock, lawmakers will start working inside the chamber on Thursday. A resolution to urge China to release South Korean activists for North Korea human rights from months of detention will be up for a vote on Thursday.