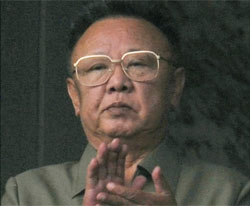 “North Korea’s General Secretary Kim Jong-il ordered [people] to build nuclear weapons through a uranium-enrichment [facility] in parallel with keeping the plutonium-made nuclear bombs when he was alive,” the Mainichi Shimbun said yesterday. “This was discovered in the ruling Workers’ Party’s internal documents that the Mainichi Shimbun obtained.”

If the report is true, it would be the first time the late leader’s nuclear ambition has been detailed.

“North Korea has constantly claimed that their uranium-enrichment activities were for the peaceful development of fuel for nuclear plants,” the report said. “This document clarifies that the uranium-enrichment is based on military purposes, overturning their previous claims.”

The report said that the 19-page document was written in February, after Kim died, and seemingly aimed to educate middle-level officials of the ruling party, given the fact that it specifically explains international affairs.

The Tokyo Shimbun, which also acquired the document, also said that, “Kim Jong-il directed people to make it a top priority to produce a large amount of atomic weapons made of highly-enriched uranium fuels.

“The document said that when North Korea opened its uranium-enrichment facility in Yongbyon to a U.S. scientist in November 2010, General Secretary Kim said, ‘The uranium-enrichment program isn’t used for the civilian industry,’ ” reported the Tokyo Shimbun.

“He said, ‘It’s definite that it is for building atomic bombs and a large nuclear arsenal’ for military purposes.”

When it comes to its diplomatic relations with Japan and the United States, Kim’s youngest son Jong-un reportedly said: “We should keep our strong position and keep in mind the fact that the nature of the enemy, like a wolf, doesn’t change, and we should stay hostile against it.”

Pyongyang’s nuclear ambition shown in the document seems to make sense, a South Korean source familiar with North Korean affairs told the Korea JoongAng Daily on the condition of anonymity.

“Kim Jong-il always said that he was developing nuclear weapons for sustaining his regime, so it is seemingly possible that he would have said like that,” the source said. “Although we can’t verify whether the document is true or not, there are many such documents leaking from the regime to China or Japan by people who are selling them for money.”