Park aides bicker as the campaign opens its HQs

Park aides bicker as the campaign opens its HQs 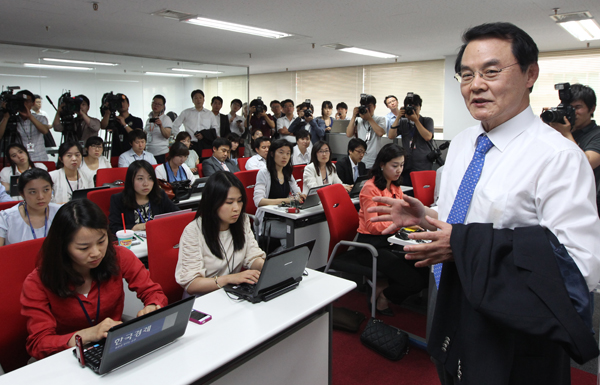 Hong Sa-duk, right, the chief manager of the Park Geun-hye presidential campaign, holds a press conference yesterday on the opening day of the headquarters, located on the second floor of the Daeha Building near the National Assembly. [YONHAP]


A sign of rupture emerged yesterday among loyalists of the ruling party’s presidential frontrunner, Park Geun-hye, on the opening day of her campaign headquarters.

Kim Chong-in, a co-head of her campaign, attacked the Saenuri Party’s floor leader Lee Hahn-koo for his ties to the country’s conglomerates.

A long-time adviser to Park who served under her emergency leadership of the ruling party before the April legislative elections, Kim criticized Representative Lee, nicknamed Park’s “economics tutor,” for protecting the large business groups.

“Because Lee served a conglomerate for a long time, he speaks largely on behalf of the large business groups,” Kim said in an interview with MBC radio yesterday. Lee had worked in the now-defunct Daewoo Group.

Kim also criticized Lee for not promoting his philosophy of economic democratization.

The internal struggle between two of Park’s aides is a sign of a potential power struggle to earn the frontrunner’s favor as she kicks off her campaign. Park has pledged to more tightly oversee large conglomerates and expand welfare services.

Since he joined the ruling party’s reform, Kim has strongly promoted the concept of economic democratization. The idea was received as forcible reform by the conglomerates, and the business community publicly denounced it.

Kim’s criticism came as a surprise to many, as he is one of the co-chairs of Park’s presidential primary camp, along with former, six-term lawmaker Hong Sa-duk.

Kim also told the JoongAng Ilbo that he wanted to stop her aides from giving unnecessary advice.

“Her path to the presidency is clear,” Kim said. “And she has the right understanding of the situation, so I wanted to stress that there is no need for her aides to meddle in her business.”

“Is it a crime for having worked for a business group?” Lee asked. “I think it is better for Kim to say what specific policies he has in mind to realize economic democratization.”

The campaign headquarters opened on the second floor of the Daeha Building near the National Assembly. Just like Park’s 2007 primary campaign, two co-chairs work as the chief managers.

“This is a primary camp equipped with only the most basic functions,” Hong said yesterday. “I am after the art of addition and multiplication. The primary process is the art of endless editions, and when it ends, you will see the art of multiplication.

“When the outcome of an addition is five million votes, you need to multiply by two to make it 10 million, but when the outcome is two million, you have to multiply it by five. I have told lawmakers not to badmouth Park’s primary rivals because it will damage the addition.”

It was evident that the camp was built for not only the primary but for the December presidential election. Representative Lee Sang-il and former lawmaker Cho Soon-sun were named as the spokesman and spokeswoman of the camp.

Cho was also a former spokeswoman of the party, and Lee was a long-time journalist with the JoongAng Ilbo.

“Rather than commenting on her rivals in the primary, we will focus on countering the opposition parties’ attacks,” Lee said yesterday.