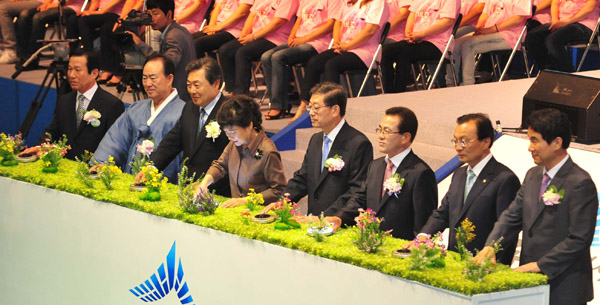 The ceremony launching Sejong City as the 17th metropolitan autonomous entity in Korea is held yesterday. The Saenuri Party’s Park Geun-hye (fourth from left), Prime Minister Kim Hwang-sik (fifth from left) and Democratic United Party Chairman Lee Hae-chan (second from right), along with some 2,000 citizens, attended the ceremony for the city, which will eventually host some 36 government agencies and ministries.[YONHAP]


Despite the National Assembly’s opening ceremony being held in western Seoul yesterday afternoon, key lawmakers of both the ruling and opposition parties flocked 120 kilometers (74.5 miles) south of Seoul to the launching of the country’s new administrative capital earlier that morning.

Some 10 years in the works, Sejong City held its inaugural ceremony to celebrate its official opening as the 17th metropolitan autonomous entity in Korea.

“The government will actively support Sejong City to become a city which leads in education, culture, transportation, welfare and all other aspects,” said Prime Minister Kim Hwang-sik in his opening speech at the ceremony yesterday, which was attended by some 2,000 officials, lawmakers and Sejong citizens.

As an indication that both camps are trying to earn support from the Chungcheong region for the upcoming presidential election, Park Geun-hye, the ruling Saenuri Party’s presidential front-runner, and liberals Lee Hae-chan, chairman of the opposing Democratic United Party, along with Moon Jae-in, former chief of staff of President Roh Moo-hyun, and Sohn Hak-kyu, former Democratic United Party chairman, made a trip to Sejong.

Representative Park, who opened her presidential campaign headquarters yesterday, said, “Sejong City was a promise to the citizens to realize balanced national development,” and that she was pleased that “there were many complications and difficulties but that the promise could be kept and realized.”

When President Lee Myung-bak attempted to pull the plug on the Sejong project becoming a government center in 2010, Park joined the opposition to support it.

President Lee was not in attendance at the ceremony yesterday, drawing criticism from the opposition party. DUP chairman Lee said, “Even when President Lee was near the Sejong City area, he never visited the site, not even once.” 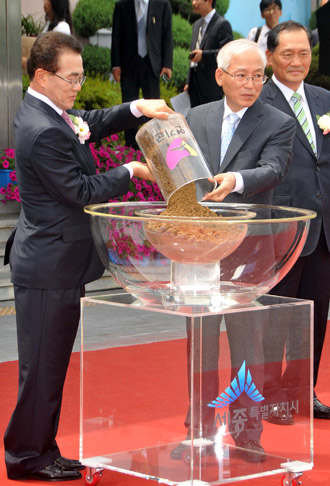 The Blue House responded that President Lee “had a schedule to attend the opening ceremony of the National Assembly and it was too tight to go to Sejong City” and that there was “no other particular reason.”

The capital relocation project was the brainchild of late President Roh Moo-hyun as part of his presidential campaign pledge to decongest Seoul by moving the country’s capital to the Chungcheong region. Incumbent President Lee tried to scale down the move, but with National Assembly approval, the project proceeded along.

The administrative area of the mini-capital is 465.23 square kilometers (179.6 square miles), three-fourths the size of Seoul. Starting with the Prime Minister’s Office move in September, 36 ministries and government agencies will move to Sejong City by 2014, with more than 10,000 civil servants expected to reside in the city. 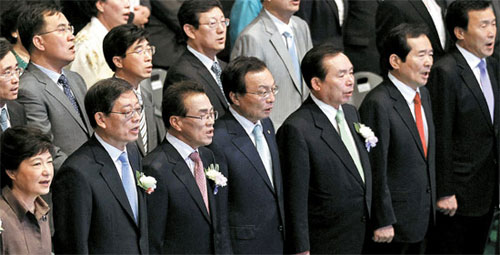 Property prices in Sejong City in Yeongi County are already seeing a boost amid a real estate slump in the rest of the country.

The first bloc of apartments, named “First Prime,” was completed in December after four and a half years of work. The complex, which has 2,242 apartments, is now 88 percent full, and the second bloc began accepting residents last month.

The Ministry of Land, Transport and Maritime Affairs stated last month that Sejong City saw the greatest ascension rate of real estate prices in the country according to May statistics.

As portions of its construction projects are completed in Sejong City and expansion of its roadwork and infrastructure is in the works, the Land Ministry said it saw an influx of 0.555 percent in land prices there between April and May, higher than Yeosu, the site of the ongoing 2012 World Expo in South Jeolla, coming in third with a 0.353 percent increase.

The cost of apartments in Sejong City rose on average 1.6 percent this year according to data from Joinsland, a real estate data provider and affiliate of the JoongAng Ilbo.

But there is still a lack of convenient shops for residents’ in Cheotmaeul, the first village of Sejong City. An E-Mart is not set to open until the latter half of next year despite the influx of residents, who currently drive 15 minutes away to Daejeon for shopping needs. Likewise, there is no general hospital.

Sohn Gi-seop, an administrative official, told the JoongAng Ilbo, “Residents’ inconveniences will be resolved as soon, medical facilities, hagwon [private academies] and convenience stores will be admitted to the Cheotmaeul second bloc of apartments [which holds 4,278 units].”