Kim Yu-na to compete in the 2014 Olympics

Kim Yu-na to compete in the 2014 Olympics 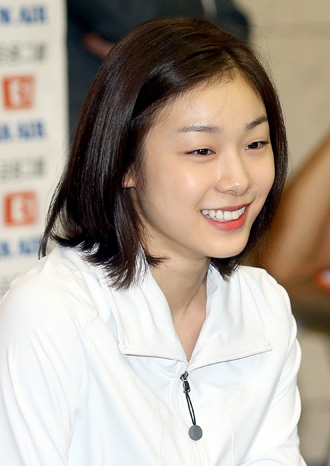 Olympic figure skating champion Kim Yu-na announced yesterday that she will return to international competition and compete in the 2014 Winter Games in Sochi, Russia, after which she will retire.

Speculation had been growing that the 21-year-old would end her decorative career, which includes a gold medal at the 2010 Vancouver Olympics and a 2009 World Championship title, after taking a year off from international competition.

Kim sat out the 2011-12 Grand Prix Series after finishing second at the World Figure Skating Championships in Moscow in April 2011.

At a hastily scheduled press conference at the National Training Center in Seoul yesterday, Kim said pressure has been mounting to repeat her gold-medal success from Vancouver.

“After winning the gold medal at the Vancouver Olympics, I had a hard time finding a higher goal, but expectations from the fans grew more and more,” Kim said. “Honestly, I wanted to be relieved from the pressure at least for a day.”

But Kim said she would not cease to inspire because of the pressure mounting on her to defend the gold.

“I thought that maybe the reason I had difficulty continuing my athletic career was that I was too focused on the public’s expectations of me,” Kim said. “I have to realize that it would be OK if I lower my expectations of myself and set the goal of pursuing figure skating for myself only.

“If I don’t continue my athletic career because of the pressure to be the best and give it up, it would remain a big regret later in life.”

Declaring that it would be a new beginning, Kim also disclosed a bid to run for a membership position at the athletes’ commission of the International Olympic Committee, the world’s governing body for the Olympics.

“While I was helping Pyeongchang’s bid to host the Winter Games, I fostered a dream as an IOC member,” Kim said.

Kim, along with President Lee Myung-bak, was among the presenters for Pyeongchang in its successful bid to host the 2018 Winter Games.