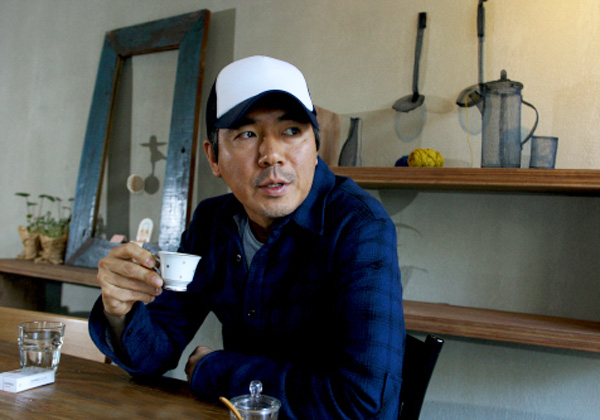 
LOS ANGELES - Film director Kim Ji-woon, 48, is often dubbed a “cinematic stylist” in the Korean film industry. With a filmography that spans a variety of genres, from the horror film “A Tale of Two Sisters” (2003) to noir film “A Bittersweet Life” (2005) to the Korean spaghetti western “The Good, the Bad, the Weird” (2008), Kim has shown the Korean public a versatility as an auteur and a talent for stylish cinematography.

With his latest film, “Last Stand,” to come out early next year, Kim makes his foray into Hollywood. The action film, distributed by Lionsgate with a $50 million budget, has also grabbed headlines as the comeback film for actor and former governor of California Arnold Schwarzenegger.

In “Last Stand,” Schwarzenegger plays Ray Owens, who leaves the Los Angeles Police Department after an unsavory operation and becomes a sheriff in a small border town in New Mexico. The film follows the action-packed chase between the police and a notorious drug baron and his gang, who try to cross the U.S. border. The JoongAng Ilbo met with Kim in Los Angeles during final production for the film.

Q. Can you describe what it’s like shooting your first Hollywood film?

A. Hollywood has wanted new blood to inject a fresh take on films for a while now. Making it to Hollywood was not necessarily my goal as a director, but somehow I got here doing something I like. But I don’t think of my role here as a representative of Korea. I just want to give the audience a chance to enjoy a film that speaks of a universal experience.

The plot revolves around ordinary people along the U.S.-Mexico border who risk their lives to fight off a strong enemy. It’s a character-based action film. I think that the film’s lighthearted spectacle can be enjoyed in the same way as “The Good, the Bad, the Weird.”

“Last Stand” has already created a lot of buzz.

Maybe it’s because it’s an entertaining, commercial film. I like the fact that it’s a commercial action film that deals with ordinary, universal situations. 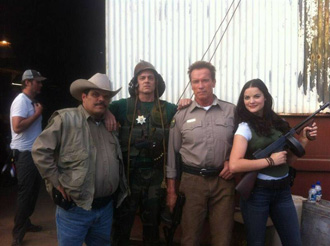 How was it working with Schwarzenegger and the rest of the cast?

Schwarzenegger is always full of energy. He is a diligent and smart actor. Regardless of the nationality, I felt lucky to be working with good actors and being able to achieve an end result with them. I also realized that there is something that reaches beyond language in the art of cinema.

Did you have any trouble communicating?

There are a lot of talented experts in Hollywood and they have a logical, scientific system. I don’t expect to have an emotional bond here like I do in Korea. In Korea, the filmmaking process is centered on the director, but not in Hollywood. You need to constantly request things and appeal to those you work with. I felt the need to form my own logic in how to persuade others.

You must have been lonely in Hollywood.

I found I was just another foreign worker here. [Laughs] I don’t have a lot of friends here and all I did was work, so in a way, I felt empathy toward foreign workers. I felt myself getting stronger when I set the goal for myself not to give up and to endure this loneliness. I liked the fact that here I had more time to read books and think more.

You must feel a mix of a sense of accomplishment as well as anxiety.

I feel the same way as when I debuted in Korea. Like then, it’s difficult and I feel nervous about my debut. Also, I feel pleasure in the fact that I was able to make a film with top actors in Hollywood, the center of the global film industry.

You’ve made noir, action, thriller and even horror films. What’s next?

When I finished shooting the crime thriller “I Saw the Devil” (2010), I spent a lot of time just thinking. After a lonely year in the U.S., I thought a lot about love. Maybe that’s why, but I think I’ve changed a lot. I now like beautiful melodramas rather than cruel ones.