Beacon of hope for HHI in H2 as orders trickle in

Beacon of hope for HHI in H2 as orders trickle in 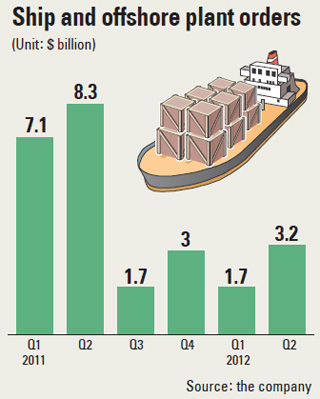 After enduring a tough start to the year, a rocky period when orders plunged and its stock price halved, Hyundai Heavy Industries (HHI) embarked on the second half this week in buoyant spirits after winning its first order of this year for super-large container carriers.

HHI said yesterday it has signed a $1.2 billion deal with a Greek shipper for 10 13,800-TEU container carriers. Each measures 368 meters (1207 feet) in length and 51 meters in width, or four times bigger than a football stadium. A total of 13,800 20-foot-equivalent containers can be loaded onto each vessel.

After completion, the ships will be leased by Taiwanese shipper Evergreen Group on a long-term contract. It is the first order of this size and scale made during the prolonged recession in the global shipbuilding market.

“Industry insiders are paying attention to this because HHI is a leading shipbuilder. Whether it proves to be a breakthrough for the stagnant market remains to be seen, though,” said Park Joon-soo, an employee at the company.

An industry insider said the order could yield handsome profits for HHI when the ships are delivered as the market is likely to improve in the interim.

“HHI can expect higher profits from the order after three or four years as leasing prices will be higher then,” he said. Under its contract, HHI will also pocket some of its client’s leasing earnings.

Due to the impact of the euro zone crisis, the world’s largest shipbuilder was awarded orders worth $1.7 billion in the first quarter of this year, a drastic drop from $7.1 billion one year earlier.

According to the HHI employee, Q1 orders were lower than last year because the company did not want to accept low-value contracts. Instead, it waited for more lucrative orders for offshore facilities, he added.

“Amid the current downturn, some shippers place orders at much lower prices to take advantage of the situation, which affects the profitability of large shipbuilders,” said Yang Jong-seo, a researcher at Kexim Overseas Research Institute.

HHI’s second-quarter performance saw little improvement as it only bagged one order for a $600 million oil-production facility last month.

The company is not overly concerned, however, as it has high expectations of winning a $2.5 billion order for a floating, production, storage and offloading (FPSO) unit from Nigeria in the second half.

Market watchers have concerns about the poor performance of HHI as its stock price has fallen sharply from a peak of 554,000 won ($487) in April last year to 269,500 won yesterday.

“HHI’s order backlog has been dwindling as it has been reluctant to accept low-priced ship orders in the wake of the euro zone crisis,” said Yeom Dong-eun, an analyst at HMC Investment & Securities.

According to Clarksons Research, HHI ranked third with 5.28 million compensated gross tons (CGT) in order backlogs in late May.