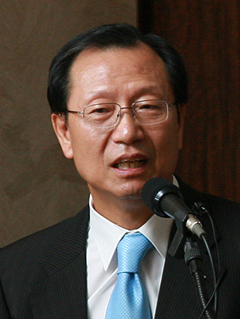 The government and corporate sector have an inflated view of how attractive the country is to foreign investors, according to Kim Jong-kap, the chairman of Siemens Korea.

“It has been difficult for Korea to garner more attention than China from foreign investors,” the 60-year-old said at a press conference yesterday marking the end of his first year at the job.

“In terms of its economic size, Korea is in an odd position. It’s not so big, but also not too small to have its potential ignored. Moreover, many multinationals still classify it as a high-cost investment spot, largely due to a slew of government-imposed regulations and extensive labor-management conflicts.”

But he said the perception of Korea held by Siemens and many other multinationals seems to be changing. China, which has recently been seen as a hindrance to the nation’s economic growth, may actually benefit Korea in the near future, he said.

“The last time Korea attracted great interest from foreign investors was during the currency crisis in the late 1990s, but that was largely due to the fact that Korean firms were greatly devalued,” he said.

Now it is seen as a potential R&D base and a stepping stone for companies to penetrate its Asian neighbors, he added.
Kim ranks as the first Korean to lead the local operation of the German technology powerhouse, which deals with electronic and medical appliances as well as industrial plant solutions, energy and health care infrastructure. Siemens Korea posted sales revenue of 1.8 trillion ($1.6 billion) last year and has 2,300 employees across 12 divisions.
He formerly served as the chairman of Hynix Semiconductor and vice minister at the Ministry of Commerce, Industry and Energy, subsequently renamed the Ministry of Knowledge Economy.

“China, when seen from the outside, has been attractive to investors for two main reasons: One, it is a gigantic market, and two, it is a manufacturing and R&D base,” he continued. “But a number of multinationals are becoming skeptical about the second point as it has hiked its minimum wage by 20 percent, while average salaries there have climbed 16 percent [in the last couple of years].”

Speaking about Korea’s competitive edge, he cited the country’s recently signed series of free trade agreements with the United States, the European Union and the Association of Southeast Asian Nations, which shows its strong desire to open up to the world market.
Korean ranks No. 7 in the world in terms of R&D spending.