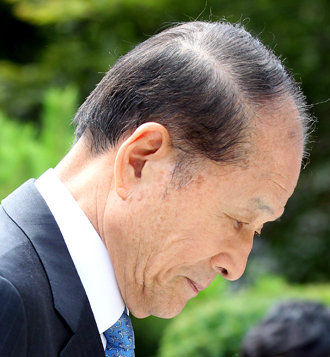 Lee Sang-deuk, the older brother of President Lee Myung-bak and a political heavyweight who once served as the deputy speaker of the National Assembly, appeared before the prosecution yesterday to answer mounting questions about his alleged involvement in a series of bribery scandals.

The 77-year-old former six-term lawmaker of the Saenuri Party showed up at the Supreme Prosecutors’ Office at 10 a.m. in a silver sedan, accompanied by his lawyers. He is accused of receiving money from savings banks in return for his influence to keep the sinking financial outlet afloat.

Standing in front of about 100 reporters and photographers, the solemn-faced Lee paused for about 10 seconds. “My heart really aches,” Lee said, adding, “I will answer the questions faithfully.”

When a reporter asked him to give a comment to the Blue House, Lee said, “That’s why I said it hurts.” The prosecution staffers then quickly ushered him into the building to begin questioning.

Lee is suspected of receiving a total of 600 million won ($527,241) from Solomon Savings Bank and Mirae Savings Bank from 2007 to 2010 as they tried to salvage their businesses. Despite the alleged lobbying, the two banks were suspended in May this year for risk of insolvency.

Lee was also accused of receiving 300 million won from the Kolon Group over the past decade.

Three prosecutors and an interrogator questioned Lee yesterday over the allegations. While Lee appeared at the questioning as a witness, his status will likely be changed to suspect, sources at the prosecution said.

The prosecutors will also seek a pre-trial detention warrant early next week to further investigate Lee, they said. “He is an old man, and we have a lot to ask,” a prosecutor said. “So we need time.”

The prosecution will seek the warrant on charges of violating the political funding law, but more charges on bribery could be applied when an indictment is made. It was the first time Lee was summoned by the prosecution although his name came up in numerous corruption scandals in the past.

In May last year, Lee was accused of influencing the Pohang University of Science and Technology to invest in the Busan Savings Bank.

In December, Lee’s long-time aide was arrested on charges of receiving 600 million won from the SLS Group to lobby for its chairman, and Lee issued a public apology for the trouble and said he won’t seek re-election in April this year.

More accusations unfolded this year. The prosecution also found 700 million won in mysterious funds in a bank account of Lee’s female secretary during its investigation into the SLS Group’s massive bribing of politicians. Lee later admitted that the money was from his private funds.

Earlier this year, Lee was also accused of having received 200 million won from Kim Hak-in, head of the Korea Broadcasting Art School, in return for using his influence to award Kim a legislative election nomination.

While the president’s brother managed to avoid questioning from prosecutors over the previous suspicions, he was not able to dodge the snowballing allegations that he had received money from the troubled savings banks.

When the accusation was first made in February, Lee issued a press release and said, “The allegation is totally untrue. I swear upon my honor.”

The Blue House refrained from commenting on the presidential brother’s appearance before the prosecution. “There is nothing to say,” Park Jeong-ha, the presidential spokesman, said yesterday.

Nicknamed “Prince of Yeongil,” the former lawmaker was known as one of the most powerful politicians in the Lee administration. With his influence in the ruling party, people referred to him by saying, “All roads lead to the brother.”

While he tried to stay away from sensitive domestic issues and traveled around the world as a special envoy for energy diplomacy, allegations lingered over his influence-peddling, and he ended up facing prosecutors with several months left before his younger sibling’s presidential term ends.

The latest case involving the presidential brother is the second battle between Choi and Kim. Their first duel took place in 2007 over the suspicions involving then-presidential candidate Lee Myung-bak over the BBK financial fraud scandal and the real estate speculation allegation.

At the time, Kim was the defense lawyer of the presidential candidate, while Choi worked on the case as a senior prosecutor of the Seoul Central District Prosecutors’ Office. After the probe, Lee Myung-bak was cleared of the accusations.

Five years later, the two faced each other in a case involving the presidential brother. Choi’s team also included other veteran prosecutors, including Yoon Dae-jin, head of the advanced crime department.

Kim’s team included former prosecutors from the Seoul Central District Prosecutors’ Office - Seo Chang-hee and So Jin. Seo was a classmate of Choi at the Judicial Research and Training Institute, and So was a successor of Choi at the Seoul prosecution.