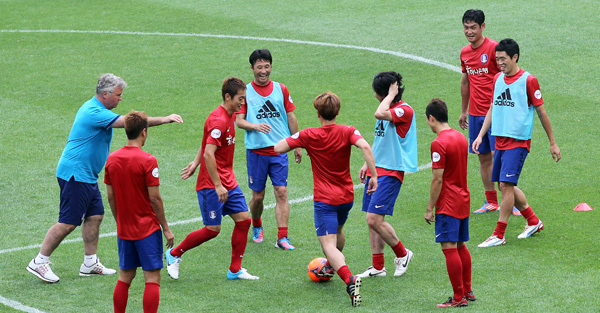 
Guus Hiddink, Korea’s former national football coach who guided the Taegeuk Warriors to the semifinals in the 2002 FIFA World Cup, said at a press conference in Seoul yesterday that the national team must remember the hard-earned lessons from its historic run.

Hiddink came to Korea on Tuesday to lead his 2002 squad one last time against the K-League All-Stars. The match, arranged on the 10-year anniversary of the World Cup, will be held at Seoul World Cup Stadium tonight.

“It is good to live - not for too long, but for a few hours - in the past and think of how beautiful it was. But we also know that we had a very difficult approach at that time to the World Cup,” Hiddink, 65, said at a press conference before a training session with Team 2002.

The Dutchman, who took the helm of the Korean national team in 2000, said that he faced strong domestic resistance during the one and a half years of preparations leading up to the FIFA tournament.

He said that in the beginning, the Korean public did not like his rigorous training sessions and practice matches against strong opponents, from which Korea sometimes suffered humiliating losses.

Hiddink added that the huge disparity between the expectations for the team from the outside and from the inside also gave him a hard time transitioning. Korea, earning its fifth straight berth to the World Cup when it co-hosted the FIFA event with Japan, had never won a match in the tournament before 2002.

“It was a hard time in the beginning and we should remember that as well,” he said. “Now we’re having a great moment, but I think it’s even more important to learn from how you can take a good approach to such a big tournament.”

For the anniversary match, Hiddink will be reunited with most of his 2002 squad. Nineteen players of the 23-member team, a majority of whom are now retired, will return to the pitch as players today.

Park Ji-sung, a midfielder for Manchester United, will reunite with the 2002 team, making his first appearance in Korea since September 2010. He has retired from international competition in January 2011.

Park, the most beloved pupil of the Dutch manager, followed the coach to Dutch side PSV Eindhoven in 2003, which became a stepping stone for his entry into the prestigious English Premier League in 2005.

“He made a very good step in between to go to not the strongest league in Europe, but to a good league and then take a next step to the Premier League - and that’s why he has had a very good, beautiful career,” Hiddink said.

The K-League All-Star team will be led by Lee Dong-gook, a striker who was left off the national team for the 2002 World Cup. He admitted on a SBS show program earlier this year that he avoided watching Korea’s matches during the 2002 World Cup, instead spending time drinking soju until the break of dawn.

He said the experience was a difficult one. The 33-year-old Jeonbuk Hyundai Motors striker is now leading the K-League in goals with 12 from 17 games.

“If I had been there [with the team] at the time, I think I would not have been able to stand in position I am at today,” Lee said yesterday at the press conference. “I think he provided me with the motivation to play as well as I can in the K-League.”

Lee said he will show his best in today’s match - not to impress Hiddink, but for the fans. Shin Tae-yong, another striker overlooked by Hiddink leading up to the World Cup, is the manager of Team 2012.

The Seongnam Chunma manager said that Team 2012 is fully prepared and will show an “interesting” and competitive game for the fans today.

Four of Hiddink’s players will miss the game due to conflicting schedules including Lee Young-pyo, a defender playing with the Vancouver Whitecaps in MLS; Cha Du-ri, a defender with German side Fortuna Dusseldorf; and Yoon Jung-hwan, a striker who is now coaching the Japanese team Sagan Tosu.

Striker Lee Chun-soo cannot play the game due to a lingering conflict with the K-League.