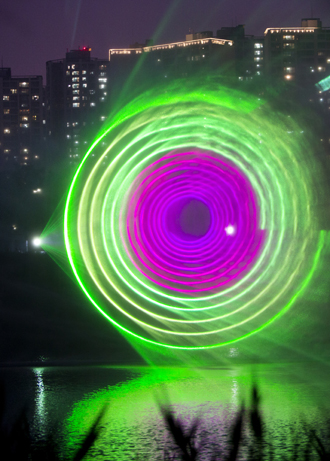 The “Olympic Laser Water Screen,” a site-specific laser display by Nam June Paik, is projected onto a water screen made by fountains in the Mongchon moat near the Seoul Olympic Museum of Art in Olympic Park. By Choi Jae-yeong

The show features some 70 clips of films and so-called video sculptures, which are signature works by Paik. The video art pioneer passed away in 2006.

The exhibit also displays around 60 of his concept drawings, which are open to the public for the first time, and 110 other works.

One of highlights is the “Olympic Laser Water Screen,” a site-specific laser projected onto a water screen made by fountains in the Mongchon moat near the museum in Olympic Park. The work was made by Paik in 2001 and had been shown for four years. The museum will again display the laser work during the exhibition period everyday except on Mondays at 8:30 p.m. in July, 8 p.m. in August and 7:30 p.m. in September.