Firms to curb but not halt spending

Firms to curb but not halt spending 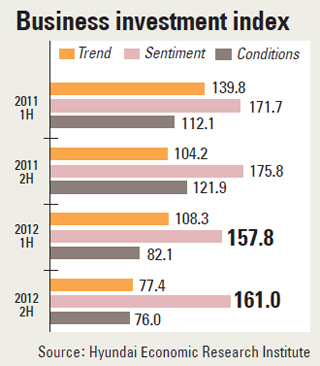 Korean companies are willing to keep investing in the second half of the year but they remain pessimistic about local business conditions, according to a report by Hyundai Economic Research Institute (HERI) yesterday.

Over 87 percent of companies want to keep making investments until the end of the year, but they are not planning to spend more than they did in the first half, the survey showed. It analyzed the investment plans of 100 major businesses over the next six months.

The so-called business investment index is a term coined by HERI to predict how much investment companies will likely make. The business sentiment sub-index rose from 157.8 in the first half to 161.0 for the second half.

“Overall, sentiment is favorable, given that 87.8 percent of the companies said they will make consistent investments, even if the economy worsens,” stated the report.

“It is notable that even though uncertainties are not going away, businesses’ investment sentiment improved slightly from the first six months of the year,” said Yim Hee-jung, a researcher at the institute.

However, companies are less satisfied with the environment in which they need to invest. The sub-index for investors’ satisfaction recorded 76, much lower than the 100 benchmark, according to the latest survey. About 69 percent of the respondents said they are not satisfied with current conditions, the report said.

They held a more negative outlook for the future, with around 55 percent of the companies predicting that conditions will not improve this year.

“Businesses are aware of the need to keep investing for growth, but they are not reassured about the current market situation, which is full of uncertainty. So they remain reluctant to increase their investments,” Yim said.

Companies in the automotive, logistics, pharmaceutical, biotechnology, IT and telecommunications industries were most willing to spend as they all posted 200 in the sentiment index.

“The survey suggests the government needs to come up with measures to ease restrictions on businesses if it wants to encourage them to invest,” Yim said.

In general, companies forecast tougher conditions for management in the second half, adding that they plan to compensate for poor first-half performances by ramping up sales targets.