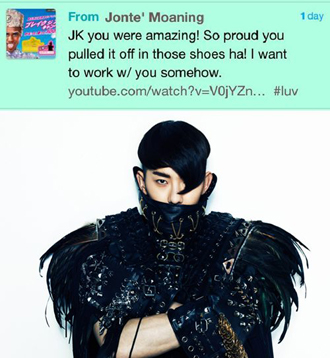 “Jo Kwon is amazing! So proud you pulled it off with those shoes. I want to work with you somehow,” gushed the famed “Single Ladies” choreographer on his Twitter.

Jonte followed up with another post uploading a link to Jo Kwon’s video.

In Korea, Jo Kwon is grabbing the eyes of many fans for his performance in 7.6 inches high heels and the showy feathered costume.

Meanwhile, the singer released his first solo album, “I’m Da One,” on June 25.