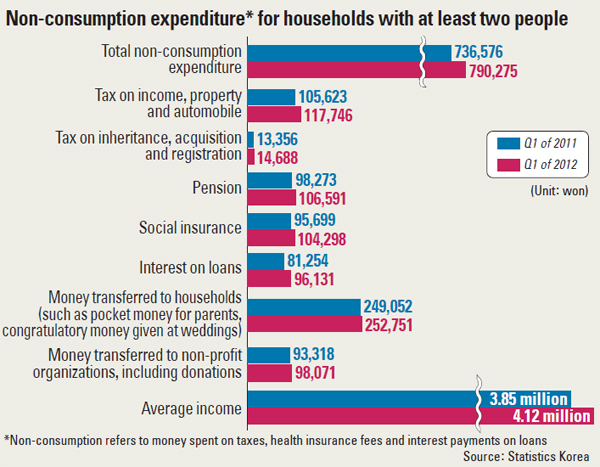 Although household debt is seeing slowing growth, experts are concerned that borrowers are increasingly turning to non-banking financial institutions such as insurance companies as banks have tightened their regulations for granting loans.

Financial Supervisory Service (FSS) Governor Kwon Hyouk-se said the level of household debt may pose a risk to the economy, and urged lenders to take pre-emptive measures to provide solutions.

“To nip this situation in the bud, financial institutions should offer more loans with fixed interest rates, allow borrowers to repay the principal over a longer term in installments, and offer their own debt workout programs for borrowers with bad credit histories,” Kwon said at a breakfast meeting with senior financial figures yesterday.

“In a bid to make sure the public can still access loans, the FSS will roll out measures so that savings banks with a small number of branches, but which are unable to rate consumers’ creditworthiness, can provide loans in alignment with major banks,” said Kwon adding that the government needs to thoroughly monitor risks relating to household debt, and add to the current debt workout programs to reduce the number of overdue repayments.

“For house poor who use most of their monthly salary to repay their debt, we need to lower interest rates and allow borrowers to pay back loans in installments while also extending their maturity,” Kwon said.

A survey released by the Bank of Korea yesterday predicted households could face their most severe credit risk in the third quarter in nine years as Korean banks look set to keep tightening their grip on loans.

The survey examined the loans that 16 local banks provided to borrowers from June 11 to June 21 and forecast that an index gauging the credit risk of households may reach 38 in the third quarter, up from 22 in the second quarter. The index measures the likelihood of borrowers being unable to repay their debt.

Experts said the BOK’s prediction implies the current status on household debt is worse than when the country was hit by the U.S. financial crisis in the second quarter of 2009, when the index reached 25.

The surge was caused by snowballing household debts, experts said.

“During the 2009 financial crisis, household insolvency wasn’t a problem, but as household debt is accumulating and people’s income conditions are worsening, their ability to repay debt is decreasing,” said Choi Byeong-o, an official at the Bank of Korea. “It’s even hard for people to pay back loans by selling their houses because housing prices are falling, and this trend may continue for the foreseeable future.”

According to the FSS, household debt hit 911 trillion won ($802 billion) as of March, but if loans taken out by self-employed businessmen are included, the figure exceeds 1,000 trillion won. The growth of household loans granted by six major banks, including Shinhan, Woori, Kookmin, Hana, Nonghyup and Industrial Bank of Korea, slowed to 368.2 trillion won last month, up just 0.7 percent from December.

“Housing prices are still falling, so no one is willing to take out a loan from the bank to buy a house,” said Park Deok-bae, a researcher at Hyundai Research Institute. “Due to the economic downturn, people can’t afford to take loans, and this is putting the brakes on growth [of household debt].” This is the first time growth has slowed to below 1 percent over a six-month period since 2000.

According to a gauge of credit risk, SMEs will stand at 44 in the third quarter, up from 31 tallied in the second quarter, the BOK said. This is the highest level since 47 was recorded in the first quarter of 2009. The central bank said it will offer limited low-interest rates for SMEs with good credit ratings.

An index gauging lending attitudes stood at three for the July-September period, down from seven in the second quarter, indicating that more banks are likely to tighten lending, according to the BOK.

Meanwhile, households’ average monthly expenditure in terms of interest stood at 96,131 won in the first quarter, up 18.3 percent on-year.