As Apple hints at low-cost, shrunken iPad, is it all over for PCs?

As Apple hints at low-cost, shrunken iPad, is it all over for PCs? 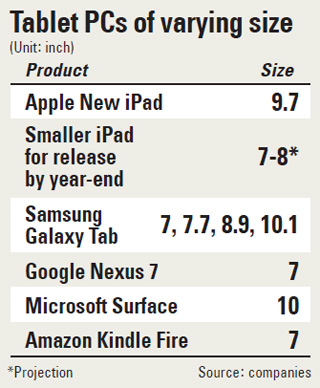 Will cheaper and smaller tablets replace PCs in the near future?

Apple said it may come up with a cheaper version of its iPad by the end of this year that is up to 2.7 inches smaller than the previous three generations of its signature tablet PC, Bloomberg reported on Tuesday.

Their entry may ignite a fierce fight for dominance in the global tablet PC market, of which Apple currently holds a 61 percent stake, according to Gartner.

Bloomberg said the anticipated lower-cost iPad will have a screen size of seven inches to eight inches and be priced around $199, similar to the Nexus 7 and Amazon’s Kindle Fire. The New iPad, the latest model from Apple that debuted in March, retails from 673,000 won ($593) to 850,000 won in Korea. The next model could be announced as early as October.

Should the report prove true, it would confirm two years of rumors that Apple is preparing a tablet sized between its five-inch iPhone and iPad. The first iPad was unleashed in April 2010.

On June 27, Google unveiled its seven-inch Nexus 7 tablet, which runs on its Android platform, just a week after Microsoft came up with plans to begin shipping its 10-inch Surface tablet later this year.

What distinguishes the Surface is the full compatibility of its desktop Windows programs, meaning users will finally see the powerful Microsoft Office programs running on a tablet.

Tablet PCs are seen as a growth engine for the mobile PC market over the next few years. According to a report from NPD DisplaySearch on Tuesday, tablet shipments will surpass laptops in 2016. “Consumers’ preference for mobile computing devices is shifting from notebooks to tablet PCs, particularly in mature markets,” said Richard Shim, a senior analyst at the market researcher.

In Korea, tablet PCs have not fully hit their stride - yet.

There are only two tablet PC brands officially available: Samsung Electronics and Apple. Samsung has rolled out its Galaxy Tab lineup in four sizes - 7-inch, 7.7-inch, 8.9-inch and 10.1-inch - and their combined share exceeds that of Apple’s iPads.

Sales figures and market shares for tablet PCs are not made public in Korea, said a Samsung spokeswoman citing the small size of the market.

In addition, demand for tablet PCs has been absorbed to an extent by the 5.3-inch Galaxy Note smartphones, a hugely successful niche product that has sold over three million units here in the past six months.

Kindle Fire, which has hit the shelves in many countries since last year, is not officially available in Korea as Amazon does not have an operation here.

So what are the prospects of the Surface and Nexus 7 being unleashed here?

“We are currently discussing the schedule for launching the Nexus 7 worldwide, and Korea is being considered as one of the destinations,” said a Google Korea spokeswoman, refusing to elaborate.