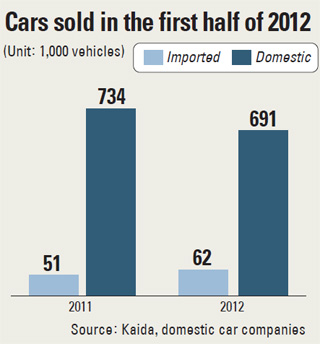 Sales of imported vehicles accelerated strongly during the first half of the year, benefiting from recently signed free trade agreements, as sales of domestic cars slumped.

According to a report yesterday by the Korea Automobile Importers and Distributors Association (Kaida), 62,239 imported vehicles were sold from January to June, a 20.5 percent increase from the 51,664 sold during the first half of 2011.

Even though sales of imports slowed from 11,708 in May to 10,578 in June, Kaida said registrations of foreign cars topped 10,000 for the fourth straight month on the way to a first-half record.

Only two domestic car makers saw first half sales increase. GM Korea sold 71,506 vehicles, up 3.5 percent from a year ago, thanks to the minicar Spark, which accounted for almost half of the sales. It was GM’s second best first-half performance in nine years.

Ssangyong Motor sold in excess of 1,000 more vehicles than it did last year - 21,841 units in the first half for a 7.9 percent increase. June was an especially good month, when the company sold 4,033 vehicles to move past Renault Samsung Motor (4,008) into fourth place among Korean automakers. It was the first time since November 2004 that Ssangyong was not in last place.

Sales by Korea’s top automaker, Hyundai Motor, dropped about 15,000 to 328,113 units. Its sister company, Kia Motors, saw a 3.7 percent decrease in first half sales to 239,138. However, the two companies posted their best overall first-half sales ever on the strength of a big increase in exports.

Renault Samsung Motor sold only 30,648 vehicles in the first half, down 41.7 percent on-year.

On the first anniversary of Korea-EU Free Trade Agreement this month, the tariff on imported cars from Europe has been cut from 5.6 percent to 3.2 percent and many European brands have already lowered their prices.

“We are expecting the domestic car market in the second half to be sluggish as well,” said an official from Hyundai Motor. “To have better performance, we will focus on our main car models and reinforce our marketing activities.”