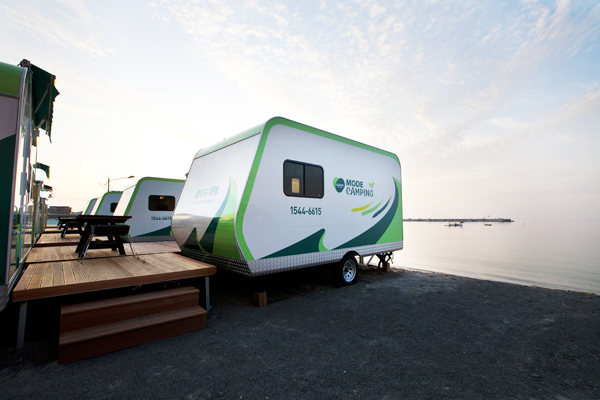 Camping trailers, also known as caravans, are shown parked at a camp site near Hakampo Beach in Taean, South Chungcheong. More sites are buying caravans, which mostly range in price from 10 million won (8800 dollar) to 50 million won, to attract customers.


The camper van and trailer industry is slowly but visibly rising up as the population of campers here has grown exponentially in recent years.

This comes in stark contrast to the situation a few years ago, when the camper van market barely existed as it has been an alien culture unfamiliar to even outdoor campers here.

However, while the number of people interested in camping as a leisure activity has been shooting up, the infrastructure for such entertainment lags far behind demand, according to industry figures.

Seo Soo-min, a businessman living in South Jeolla, has joined the ranks of newly converted happy campers after he purchased a recreational vehicle (RV) last month.

He said he hopes his RV gives him more time to spend with his family and friends in the great outdoors.

“I love camping and it gives me time to relax, surrounded by nature,” Seo said in explaining why he bought the vehicle. “Camper vans today are really well-equipped with numerous facilities, so spending the night in one is anything but inconvenient.

“This was one of the main reasons I went and bought one.”

Korea is the world’s fifth-largest automotive manufacturer, but its camper van culture is still in its infancy - unlike in the United States and Europe, where it is deeply entrenched.

According to the leisure industry, the number of campers here is expected to exceed one million this year, while camp sites across the country are likely to hit 600. Local manufacturers of camper vans say their phones have been ringing off the hook, especially this summer.

“We receive 20 to 30 calls a day, almost double what we received last year,” said Lee Dong-soo, sales team chief at Doosung Motors. “Half are from customers who want to purchase an RV for private leisure activities, whereas the other half are made by businesses in the industry.”

But Lee said the company is having trouble trying to meet demand as the vehicles are not mass-produced but made-to-order. He said it usually takes a month to build a single RV.

“We want to sell as many as we can, but our production line has its limits,” Lee said. “Buyers can go for an imported model, but most of them are too big for our roads and expensive, so demand for them is not huge.”

Although local manufacturers now just rely on imported parts to cover about 30 percent of their inventory, further localization is needed to lower prices and boost sales, according to the industry. 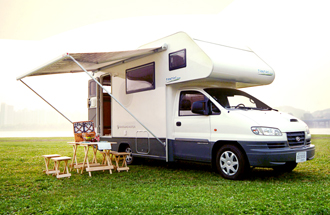 Hyundai Motor’s Starex is a popular camper van at the lower end of the 60 million won to 100 million won price range. Provided by Doosung Motor

According to the industry, demand for such vehicles here dates back to the 1990s, but it was initially restricted to wealthy customers.

Manufacturers and importers began to expand aggressively around 2002, when the government eased regulations on the industry to spur growth.

“The rules were changed in May 2002 to allow camper vans to be treated the same as regular vans,” said an official from the motor vehicle policy division at the Ministry of Land, Transport and Maritime Affairs. “This gave businesses an advantage as it simplified the registration and inspection process.”

Prior to 2002, RVs were classified as special vehicles, making them subject to stricter government inspections and regulations. Rental companies rushed to acquire imported camper vans in the mid-2000s as they expected demand to boom.

And this week, Union Dom, a U.S. automaker, announced it will open a branch in Korea, marking the first time that a foreign manufacturer of RVs has directly sold its vehicles here.

Given its relatively brief history of just 10 years, consumers and businesses alike are still hazy about the exact size of the industry and those operating in it.

People who work in the industry told the Korea JoongAng Daily that four to five local companies have the capacity to digest large orders for both camper vans and trailers, while 30 to 40 companies can make such vehicles but mainly focus on rentals over production.

“These small private companies can produce RVs and trailers, but they just make one or two a year, and dive into the rental business instead,” said Lee Hun-woo, an executive director at Doosung Motors.

“However, we don’t see this as set back the industry, because people usually get to know about RVs and caravans from rental companies. But if the industry keeps getting bigger and demand keeps on growing, these small companies could become a problem.”

Industry figures estimate the market to be worth around 30 billion won, but there is still a paucity of data to help companies set their marketing plans. This is seen as hampering the industry’s development.

“We don’t have an association or federation for camper van companies, and the government doesn’t seem to have any information about this industry, either,” Lee said. “But with the kind of camping boom we’re seeing now, we need an organized and strategic development plan.”

However, the biggest problem seems to be a lack of infrastructure.

Although there are many camp sites for caravans and RVs, they lack facilities, which industry insiders claim is causing demand for caravans to dwindle.

“I’ve talked to many regional governments that run auto camp sites, but they don’t seem to have enough money to buy caravans,” said Lee Tae-il, executive director at Miz Camping.

“The government needs to support the industry more actively. Instead of just creating sites, it needs to install facilities so people can conveniently take their caravans or motor homes there, or rent vehicles that are already there.”

For the industry to follow the successful model of the United States or Europe, private demand needs to increase, but Korea’s infrastructure and unique travelling culture stand in the way.

“We have very small roads, so even if people buy these kinds of vehicles, parking is always a problem,” Lee said. “Also, Koreans don’t spend days or weeks on the road traveling like Americans or Europeans, because Korea is so small. There are many hurdles preventing this industry from exploding in a short space of time.”