Poverty conditions for elderly in Korea among worst in OECD

Poverty conditions for elderly in Korea among worst in OECD 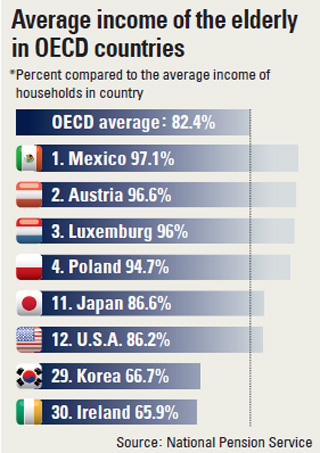 Poverty conditions for the elderly in Korea are some of the worst among countries in the Organization for Economic Cooperation and Development.

A 69-year-old man surnamed Shin was a farmer in Cheongsong County in North Gyeongsang until 1970, when he left for Pohang, North Gyeongsan, around the time Posco was built.

Shin spent more than 10 years working in iron and steel production and manufacturing, before eventually establishing a small iron-welding factory there.

Since retiring nine years ago, he now lives on about 500,000 won ($439) a month. He receives monthly pension payments of 400,000 won, plus a basic senior pension, as well as some extra allowance his children give him.

The National Pension Service revealed on Tuesday that senior citizens over the age of 65 earn an annual household income that is 66.7 percent of the nation’s annual average earnings.

The average elderly income in the OECD is 82.4 percent of the country’s average yearly income. Mexico came in first place at 97.1 percent, followed by Austria at 96.6 percent.

Despite coming in ninth in trade in the world last year, Korea placed 29th out of the 34 OECD countries in the income level of senior citizens over the age of 65, said the pension service.

The yearly income of the elderly in Korea is $14,238 - half of that of the United States, who placed 12th on the OECD elderly income list.

The number of elderly signed up for national pension and other benefits is low, contributing to the low income levels of the elderly.

With an average life expectancy age of 80, Korean elderly after retirement age are forced to continue to find odd jobs or to depend on their family for support.

According to a study on the elderly released by the Ministry of Health and Welfare last month, 34 percent of the 11,542 senior citizens since 2011 until April said they were working and, of these, eight in 10 claimed they worked “in order to earn a livelihood.”

Lee Yong-ha, a researcher at the National Pension Service, said, “The blind spot of citizens spending their old age without pension needs to be reduced and retirement and personal pension have to be increased with a better method,” and that “high-quality jobs for the elderly have to be created.”