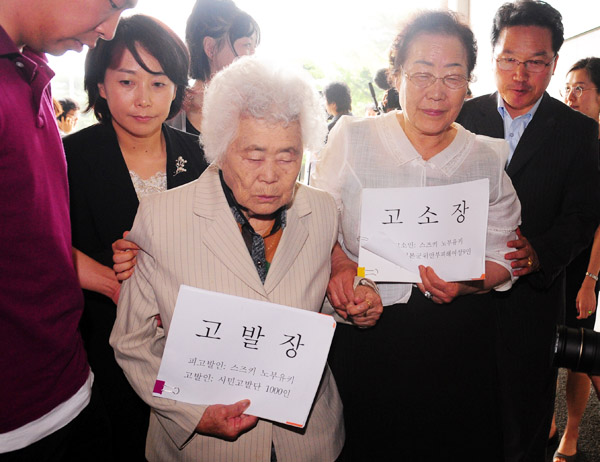 Two elderly women who were forced into sexual slavery by the Japanese military during World War II walk into the Seoul Central District Prosecutors’ Office in Seocho, southern Seoul, yesterday to file a defamation complaint against Japanese far-right activist Nobuyuki Suzuki who posted a video clip on his blog calling the war crime victims prostitutes.[NEWSIS]

The House of Sharing, an organization working for the women, said the group of 10 victims filed a defamation complaint with the Seoul Central District Prosecutors’ Office against far-right activist Nobuyuki Suzuki.
Public anger flared up last month after the 47-year-old Japanese man set up a provocative wooden post beside the statue of a young girl in front of the Japanese Embassy in central Seoul.
The slim white post tied to the statute read “Dokdo is Japanese territory,” a claim in line with those by Japan’s extreme rightists, which also include asserting territorial rights over Korea’s easternmost Dokdo islets.

The bronze statue of a young girl, which was set up in December by former sex slaves and their supporters, symbolizes Korean wartime sex slaves.
Suzuki later posted a video clip on his blog showing him setting up the post and calling the war crime victims prostitutes.

Japan has acknowledged that its wartime military used sex slaves. Still, Tokyo refuses to issue an apology or compensate the victims individually, citing a 1965 treaty that normalized ties between the two countries.
The local organization said the women, most in their 80s and 90s, also filed a complaint with the Korea Immigration Service to ban the activist from entering the country again.

Around 1,000 citizens and sex slavery victim supporters signed up in support of the legal action at the prosecutors’ office, and among them were more than 150 Japanese people, the organization also noted.

It will also seek ways to legally respond to Suzuki’s “anti-humanistic” acts within the Japanese legal system, according to the organization.
The activist must take legal responsibility for his terroristic acts that extol wartime crimes, the organization said, calling on the local government to call him into the country for an investigation.

Suzuki is also suspected to have set up a similar post near a museum on the victims of Japan’s sexual slavery in western Seoul on June 18.

Japan, which ruled the Korean Peninsula between 1910 and 1945 as a colony, has repeatedly renewed its claim to Dokdo in the East Sea.