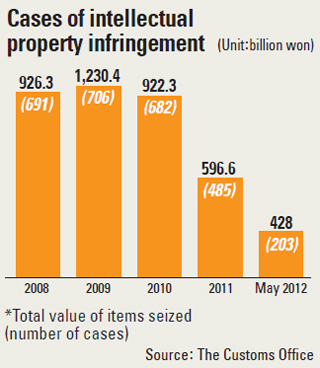 “The knockoff business in Itaewon is at risk. Counterfeiters are reporting each other to police as the crackdown intensifies,” said a 45-year-old surnamed Kim.

“The business is on the verge of going out of business,” said Kim, who was arrested last year on a counterfeiting charge.

The counterfeiting business in Korea has been hit hard by increasing pressure from police and competition from China, and some predict it will collapse within 10 years.

From January through May, the Customs Office reported 203 seizures worth a total of about 428 billion won.

The rising perils of selling counterfeit products have reduced the supply of fakes as well as the number of customers.

Around Itaewon these days it can be difficult to spot well-crafted knockoffs, so-called “A-level” fakes. “In case of a Chanel bag, there is no A-level fake. Only classic lines of the bag are sold,” said a shop owner.

Despite the pressures, the size of the counterfeit market in Korea can not be ignored, according to Havocscope (www.havocscope.com), which deals with data and information on the black market activities around the world. The U.S-based Web site estimates the worth of the global black market at $1.6 trillion and the size of international counterfeit market as $14.2 billion.

The growing number of online sites selling knockoffs are also threatening the brick-and-mortar shops in Itaewon and Namdaemun in central Seoul. Online shops are easy to access and their products appear to come in various colors and designs at affordable prices. A large number of the online stores are based in Hong Kong.

The Customs Office and industry sources alike, however, say consumers should be wary of online shopping due to many reports of fraud.

“Online shops frequently change addresses without notice and sometimes charge consumers more,” said a source from the Seoul Main Customs. “Online fake shops know that people have nowhere to turn, even if products sold turn out to be fake. This is why there are a lot of those online shops.”