Knockoffs bag a variety of customers

Knockoffs bag a variety of customers 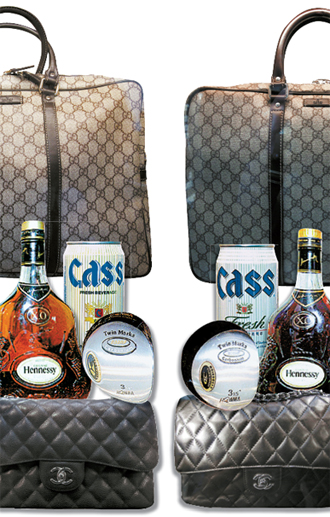 There are two identical groups of luxury items on the sides of this page. Or are there? The items on the right are genuine; those on the left are counterfeits. [JoongAng Sunday]

Most people in Korea buy one at least once in their lifetimes. They are not hard to find; some streets are even flooded with them.

They are jjaktung, slang for counterfeit luxury goods. Some jjaktung resemble the originals so closely they are called “mirror” objects.

Jjaktung goods are deeply rooted in Koreans’ day-to day lives. People purchase fake items for different reasons, but they appear to share at least one thing in common: They expect to be noticed. They also want to be perceived as being from a higher social status and treated accordingly.

The inexpensive prices of fake items usually draw people like 38-year-old office worker identified by her surname Hong. “Local brand shoes started costing 250,000-300,000 won ($220-$264) some time ago,” Hong said. “I think they are too expensive. So I turned to Itaewon to get fake luxury items. That doesn’t necessarily mean I want to have designer products. Rather, I go there because I can buy a pair of shoes with a decent design for 70,000-100,000 won.”

Hong has purchased shoes for the past few years at the same shop in central Seoul. “I can’t say the (fake) products are of the best quality, but I am satisfied with the bargain,” she said. “I can have three pairs of shoes for the price of one pair of a domestic brand,” Hong said.

She does not think counterfeit products are bad and she doesn’t feel guilty about buying them. “I sometimes come with my colleagues and friends and even bought one for my mother-in-law. She looked really pleased,” she said.

“I paid for the fake items not because they look like luxuries, but because they come with an affordable price tag and good quality,” said a person who wanted to be identified only by her surname Park.

Park mainly buys wallets and belts and was carrying a replica Prada tote bag to hold diapers. “I would pay for fake goods if they are strong enough and don’t look like cheap knockoffs. I don’t go and tell everyone the items are genuine,” Park said. “No one asks me whether it’s a real or bogus designer bag.”

People like Park, who care mostly about practicality, have less desire for luxury goods per se because affordability is their primary motivation. For them, it is not so much about status as it is money.

That is not to say they don’t enjoy being noticed. “I once carried a fake Chanel bag and my colleague said, ‘You spent a lot of money on that.’ I felt proud of myself because I can make a counterfeit look genuine,” said the 40?year-old office worker.


Having it both ways

Park, a 30-year-old housewife is armed with up-to-date information on luxury goods. Because she is from a wealthy family, she has purchased fancy items since she was young. She prides herself on having high-brow taste and possesses plenty of authentic luxury products.

Yet even she is attracted to knockoffs. “I go for counterfeits to get something that I hesitate to buy. Designer products can become out of date when the season is over.”

Some savvy consumers like Park are frequent buyers of fakes.

“I usually go to Itaewon when I hear fashion-conscious people talking about well-crafted fake items there,” said a 35-year-old fashion industry worker surnamed Ahn. “I once bought a high-quality Louis Vuitton replica wallet and no one would spot the fake because it was really close in color and material to the authentic one.”

A 45-year-old counterfeiter who has worked in Itaewon for a decade, echoes Ahn’s comment. “Even if one buys an expensive designer good, fashion shifts almost every two years,” he said. “So people purchase both fake and genuine items.”

A counterfeit shop last year produced a line of sophisticated knockoffs that replicate the exact color of a Hermes wallet, and buyers went to the shop in droves.

A 68-year-old housewife who requested anonymity is not into high-end designer brands. Yet, she bought an authentic Chanel bag after friends told her that a “woman - especially an older woman - should have at least one Chanel bag.”

“I thought I was wasting money and I didn’t like the style, but I couldn’t help it,” she said.

But one was not enough. She felt ashamed to carry the same bag over and over, so she decided to go to Itaewon with her sister-in-law. “I feel uncomfortable when buying counterfeits for about 300,000 won. I would be highly embarrassed if someone spots the fake,” she said.

Women, especially those over 60, might feel miserable if they don’t have a designer brand bag. “I become very fashion-conscious when I go to female-dominated places like a department store or church,” a 64-year-old woman said. “Frankly, I check the bag first to judge one’s status.”

A man with the surname Shin bought a fake bag for his wife. “I gave her a knockoff bag as a gift. She still cherishes the bag, which makes me feel guilty,” said Shin. “My daughter recently started doubting the authenticity of a bag” he bought for her.

Shin is not alone in giving counterfeits as gifts. There are numerous cases where women found out that their bags are actually fake after taking them to boutiques to be fixed.

In Korea, there are many reasons to buy counterfeit designer products and no shortage of opportunities. It has become a way of life that is unlikely to end anytime soon.