More benefits to be scrapped for card users

More benefits to be scrapped for card users 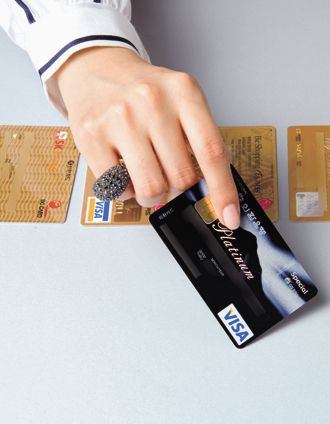 Credit card companies have vowed to slash the enticing benefits they offer their customers this year to make up for the losses they will sustain from lowering the commission rates they charge small businesses.

As they have no option but to cave in to government demands to level their fees, they said that the days of free gas and complementary flights to Jeju Island are numbered.

According to industry insiders, major credit card companies plan to cut an additional 20 percent of benefits associated with credit card use in the second half of this year.

The move comes shortly after they halved free mileage points, cash back and other incentives that accumulate from credit card usage.

Industry sources said card issuers will further scale back benefits in response to a new policy that compels them to reduce their commission rates for small retailers from September. The financial regulator has sanctioned their planned move.

In September, card issuers will lower the rates they charge stores with annual sales volume of 200 million won ($176,200) or less from the current 1.8 percent to 1.5 percent.

The commission fees levied on stores with larger annual sales of up to 100 billion won will be cut to between 1.5 percent and 2.7 percent in December. At present, they can pay anywhere up to 4.5 percent.

At the same time, credit cards firms will make big retailers that raise over 100 billion won in annual sales pay more, as they plan to raise the fees by 0.3 percentage point from the current range of 1.5-1.8 percent.

The Credit Finance Association estimates that the nation’s 14 credit card companies will lose a combined 873 billion won a year in annual revenue from the cuts.

Major credit card firms are already removing mileage promotions and other discounts they offer customers who use services and products affiliated with them. Some have raised the amount that consumers must spend to be entitled to the incentives by 500,000 won a month.

From April, Shinhan has required customers using its Shinhan 4050 Card to spend at least 300,000 won a month to get a 10 percent discount on fees at private cram school.

“In March, I had to pay 200,000 won to get a 10 percent discount off my son’s private-academy fees, but now I have to pay 100,000 won more,” said Park Mi-kyeong, a homemaker in Seoul. “If the service I receive [from my card] drops, shouldn’t the annual membership fee also be lowered?”

In March, Samsung Card canceled its free mileage for Asiana-Samsung Platinum Card holders when they purchase goods on three-month interest-free installment plans. Meanwhile, in April, KB Kookmin Card raised by 50 percent the minimum threshold that customers must spend each month to enjoy various benefits and services.

Shinhan has also cut back on its discounted movie tickets, while Lotte Card stopped giving away free admission tickets to Lotte World, an amusement park in Seoul, in May. Hyundai Card will stop providing free Wi-fi connections for users of its Purple KT Card when they travel overseas from November.

Analysts at securities firms expect the banking sector will see a significant drop in operating profit.

Shinhan and KB Kookmin Card may feel the brunt of the new measure as they controlled 22.7 percent and 14 percent of the market last year, respectively.
By Kim Mi-ju [mijukim@joongang.co.kr]