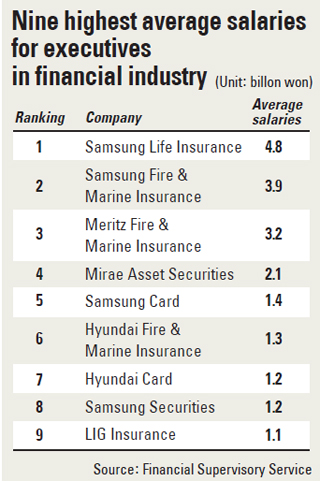 Although savings banks have been suffering from losses and the threat of insolvency for a sustained period, they have still been paying their top executives hundreds of millions of won a year, the Financial Supervisory Service (FSS) said yesterday.

Solomon Savings Bank Chairman Lim Suk received 410 million won ($361,000) in 2010, despite his bank recording a 126.6 billion won loss that year. Lim was arrested in May for allegedly offering bribes to political heavyweights from 2007 to try and stop the bank being suspended.

That same month, Solomon’s operations were suspended due to its high risk of going bankrupt.

Lim’s salary for last year has not been revealed.

Executives and board members at other suspended savings banks were also generously rewarded as shareholders suffered.

In the banking sector, executives at foreign banks were paid much more than their counterparts at domestic banks, the report from the FSS’ Data Analysis, Retrieval and Transfer System (DART) showed.