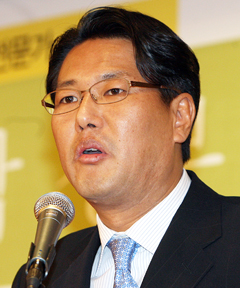 A senior foreign affairs aide to the president yesterday expressed his desire to resign over the mounting criticism of the government’s poor handling of the planned military pact with Japan.

Kim Tae-hyo, senior presidential secretary for national security strategy and one of the longest-serving aides in the Lee Myung-bak Blue House, expressed his intention to the president to step down, according to Park Jeong-ha, the presidential spokesman, yesterday.

“It is my understanding that he made the decision,” Park said. “Wouldn’t that mean he accepts [the responsibility]?”

On Friday, Korea was scheduled to sign the General Security of Military Information Agreement with Japan that lays out a procedural framework for exchanging military information between the two countries.

The Korean Foreign Ministry, however, postponed the signing at the last minute, citing a strong political outcry and adverse public sentiment.

The Lee administration also faced further criticism as it was later revealed that the cabinet had passed it quietly.

The blame game quickly flared between the Foreign Ministry and the Blue House.

Kim yesterday expressed his intention to resign as speculation mounted that he was behind Seoul’s push for the sensitive pact with Korea’s former colonial ruler.

President Lee is expected to accept Kim’s resignation, while the Blue House will continue to push for the pact by persuading the National Assembly and seeking public understanding.

“There were procedural flaws, but the prime minister already apologized,” Park said.

“This isn’t something that the prime minister or the foreign minister should assume responsibility for.”

Kim was in charge of the planned signing of the pact while Lee was out of the country to visit Central and South America from June 17 to 27.

After the secret passage at the cabinet meeting on June 26 became an issue, Foreign Ministry Spokesman Cho Byung-je said it was at the Blue House’s directive, prompting criticism toward Kim. Cho expressed his intention to step down on Wednesday.

A professor at Sungkyunkwan University, the 45-year-old aide was one of the main architects of the Lee administration’s North Korea policy.