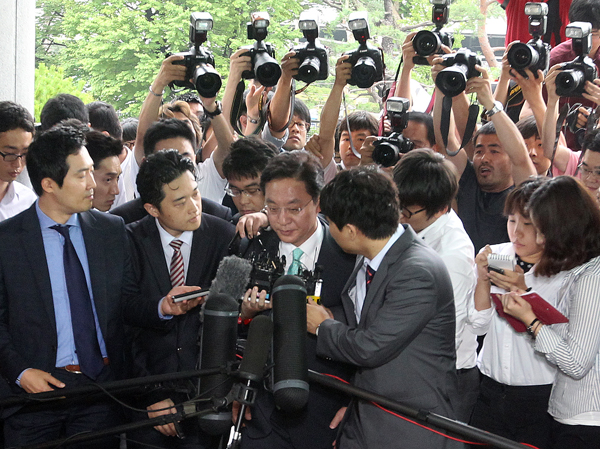 Representative Chung Doo-un, center, of the Saenuri Party walks to the Supreme Public Prosecutors’ Office in southern Seoul around 10 a.m. yesterday to be questioned over his involvement in the bribe case. [YONHAP]


A senior ruling party lawmaker was grilled by prosecutors yesterday over his role in the widening influence-peddling scandal involving the president’s elder brother and troubled bankers.

Representative Chung Doo-un of the Saenuri Party appeared at the Supreme Prosecutors’ Office in southern Seoul around 10 a.m.

Chung was accused of introducing Lee Sang-deuk, President Lee Myung-bak’s elder brother, to Lim Suk, chairman of the Solomon Savings Bank in 2007 before the presidential election. Chung was also suspected of receiving about 100 million won ($88,000) from Lim. The president’s elder brother was already questioned earlier this week over the allegation that he received a total of 300 million won from Lim. The brother was also accused of receiving more money from Mirae Savings Bank and the Kolon Group.

Before Chung entered the prosecution’s building, journalists asked him if he had accompanied the presidential elder brother when Lim allegedly handed out the money. Chung said, “It will be sufficiently explained.

Asked if the money was taken to finance President Lee’s 2007 election campaign, Chung slightly lowered his head, which could be interpreted as a nod. When asked if he was indeed nodding, Chung said “I will give sufficient explanations.”

The prosecution sources said they have obtained testimony from Lim that Chung had introduced him to the president’s brother.

“After Lee Myung-bak won the presidential primary in 2007, I told Chung that I wanted to contribute to his presidential campaign,” Lim was quoted as telling the prosecutors. “Then Chung introduced me to Lee.”

The prosecutors said they would question Chung about the nature of the arrangement and decide whether he would be prosecuted as an accomplice in the bribery between the presidential brother and the banker.

Chung was also accused of receiving 100 million won from Lim, but he has denied the allegation. Chung earlier said he had learned about a cash gift from Lim, but sent it back.

According to the prosecution, another close associate of President Lee was also involved in a related, but separate, scandal.

Kim Deog-ryong, former lawmaker of the ruling party who served the president as his special advisor for social integration from 2008 until last year, allegedly arranged the meeting between the president’s brother and Kim Chan-kyong, chairman of the Mirae Savings Bank. The banker was accused of giving 300 million won to the brother. It, however, remains to be seen if Kim Deog-ryong will be summoned for questioning.

“Just introducing the two is not a crime, so we have no plan to question him for now,” a source from the investigation team at the Supreme Prosecutors’ Office said. “We have no evidence of bribery involving him.”

It also remains to be seen if the prosecutors will expand the probe into Lee Myung-bak’s presidential campaign funding.

The presidential elder brother allegedly received a total of 600 million won from the two savings banks shortly before the December 2007 presidential election, and the liberal opposition parties are raising their eyebrows about the conspicuous timing.