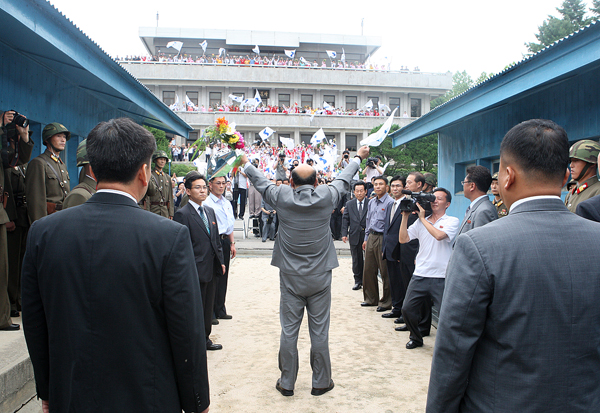 Ro Su-hui, center, vice chairman of the Pan-Korean Alliance for Reunification, waves to North Koreans right before crossing the inter-Korean border at the truce village of Panmunjom yesterday.[YONHAP]


Police in the South arrested a pro-Pyongyang activist yesterday who had been illegally staying in the North for the past four months.

Ro Su-hui, the 68-year-old vice chairman of the Pan-Korean Alliance for Reunification, a pro-North group with dual branches in Seoul and Pyongyang, made a visit to the North on March 24 in order to attend the ceremony for the centennial anniversary of the founder Kim Il Sung without authorization from the South Korean government.

“Ro’s visit is apparently a violation of the National Security Law, which means he is charged with praising, visiting, communicating with and colluding with an enemy of the state,” a police official said.

The Red Cross office in North Korea said on Wednesday that Ro would return to the South at around 3 p.m. yesterday, walking through the border village Panmunjom.

Ro appeared as predicted, and the South’s police arrested him on the spot immediately after he crossed the inter-Korean border.

Over the course of the last 104 days, Ro visited a string of monumental places and factories in Pyongyang and other cities, such as the Kim Il Sung University and the Juche Tower, the North’s official state television and news agencies reported.

His first official event in the regime was, the state media reported, to pay tribute to the late leader Kim Jong-il in the glass coffin at the Kumsusan Memorial Palace.

North Korean officials let him take trips to Mount Myohyang and Mount Kumgang, and showed him the elaborate performances of a state orchestra and a circus team.

During his stay, Ro also praised the regime and denounced the current South Korean administration in dealing with inter-Korean relations.

The North’s state television agency reported on Monday that he said “the death of ‘dear leader’ Kim Jong-il is the source of great loss and sadness for the people. The South Korean authorities ignored the demand of the people for sending a delegation to commemorate [the death of Kim Jong-il], pointing a knife toward our hearts.”

When he visited the birthplace of founder Kim Il Sung, named Mangyongdae, he wrote in a visitor’s book, an excerpt of which was broadcast on the state television: “I apologize for committing such inhumane acts during the mourning period on behalf of the Lee Myung-bak administration.” He also called Kim Jong-il “the father of people who realized the June 15 summit and Oct. 4 declaration by arranging inter-Korean meetings for the first time since the division of the two Koreas.”

On April 25, he issued a joint statement with other officials of the alliance’s Pyongyang branch, which read: “Let’s denounce and punish the conservative powers of Lee Myung-bak, who insulted the highest dignity and regime of our people.”

In cooperation with the National Intelligence Service, police launched a probe into Ro and the alliance.

Policemen yesterday raided the office of the pro-North group and Ro’s house and confiscated computer hard disks and documents. The alliance was classified as an anti-government organization by the Supreme Court in 1997.