The justices of the Supreme Court in Seocho District, southern Seoul, yesterday deliberate on the lawsuit filed against the Ministry of National Defense by Gangjeong Village residents who hoped for a halt to the construction of a naval base on the island. The top court yesterday gave the green light to naval base construction. [YONHAP]


The Supreme Court yesterday ruled that the construction of a controversial naval base on southern Jeju Island is lawful, giving the military the go-ahead on the project.

The court ruled in favor of the Ministry of National Defense in a lawsuit filed against the ministry by Gangjeong Village residents on the island hoping for a halt to construction.

The base has been the subject of heated controversy and conflict for the past several years. 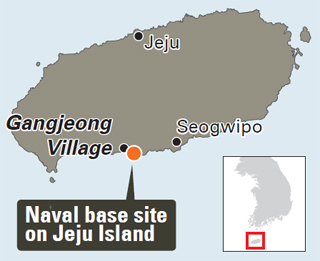 The Supreme Court sent the case back to the Seoul High Court yesterday, overturning an earlier ruling by the lower court that the initial construction plan, approved by the Defense Ministry in 2009, was invalid because the construction’s impact on the environment hadn’t been properly assessed.

More than 430 villagers of Gangjeong had jointly filed a lawsuit against the country’s national defense minister in April 2009.

The Supreme Court’s ruling yesterday also overturned the judgment made by the lower court that the ministry’s first approval in January 2009 was invalid.

Earlier on in the first and second trials, the court said that there were flaws in the process of evaluating the environmental impact in the area when the ministry approved the project in early 2009. But the amended approval that was made in March 2010 was seen as legitimate.

Gangjeong Village residents have complained that the permission to build the naval base was given in January 2009 without the ministry evaluating the environmental impact of the project.

The villagers took legal action in April that year. During the lawsuit in March 2009, the Defense Ministry approved the amended project plan that includes an environmental-impact assessment.

The plan calls for a modern military port that would hold up to 20 warships simultaneously along with 150,000-ton cruise ships. The base is aimed to be completed by 2015, and it will give Korea a launching point for sending naval vessels into the South Sea, which is a key trade route.

Civic groups, environmental activists and residents, however, have staged protests and taken legal steps to halt construction, citing potential environmental damage to the area that has been designated as a Biosphere Reserve by Unesco.

With the court ruling in favor of the Defense Ministry, the construction of the military base is expected to pick up speed.

“The Supreme Court has confirmed that there is no problem in the construction process of the naval base that the opposition [including environmentalists and some residents] has been arguing,” said a Navy official.