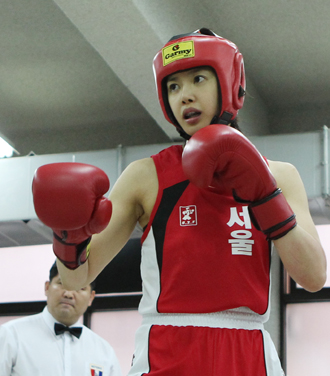 Lee knocked down her opponent in the women’s 48-kilogram (105-pound) segment at the Seoul City Amateur Boxing Competition, which was held at Korea National Sport University in Songpa District, eastern Seoul yesterday.

Lee claimed a win of 20-0, proving that she is more than just a pretty face.

As one of the four women who moved to the next round, Lee will face another match today.

If she wins the match, the 30-year-old actress will take the title as the Seoul representative and enter the ring at the National Sports Festival, which will take place in Daegu from Oct. 11 to 17.

While filming the KBS dramas “Poseidon” (2011) and “Wild Romance,” Lee was professionally trained for boxing and has since pursued the sport wholeheartedly.

After first coming across boxing in her drama, Lee entered and won the Seventh Annual Women’s Amateur Boxing Competition in 2010.