Escape the city and spend the summer at sea

Escape the city and spend the summer at sea

Finding a way to cool off on a hot, humid day in Korea can be tough. Swimming pools and water parks are an option, but the traffic, crowds and overall unpleasant atmosphere are discouraging, to say the least. But why stand in a line for 30 seconds of splashes when you can escape to a natural remedy?

Yachting, kayaking and rafting are just three ways to go off the beaten path and enjoy your summer without bumping shoulders.

Sunbathing in white linens on a luxurious yacht with a pina colada in-hand and Brad Pitt wearing the captain’s hat - not a bad way to spend a summer afternoon.

You don’t need to be a millionaire or sailing in the Caribbean to make this fantasy come true (excluding Brad, perhaps). A number of harbor cities around the country offer different types of yacht tours including Jeju Island; Haeundae in Busan; Jeongok Harbor in Hwaseong, Gyeonggi; and Chungmu Marina in Tongyeong, South Gyeongsang.

One of the many charms of spending a day on a yacht tour is that you can enjoy the sea with all your senses. As soon as the tour starts, a stunning view of the boundless ocean opens in front of your eyes while the smell of the sea reminds you where you are. The sound of the waves crashing comes as the cool breeze slips through your fingers.

There are two types of yacht tours: public and private. Busan Bexco’s public yacht tour called Yacht B (www.yachtb.co.kr) offers one-hour tours starting from Gwanganri to Haeundae to Dongbaek Island, along Marine City and back to Gwanganri. During the tour, sea fishing, barbecuing on the yacht and foot baths are all available.

Yacht tours get especially popular during the sunset. To catch the view, you can purchase the tour program that starts at 7 or 8:30 p.m.

If you prefer a private session on a yacht, you can rent the whole boat at each of the above-mentioned cities. It can be a little more costly, but if you are planning on a romantic night, you’d have to try pretty hard to screw it up.

You can also try skin-scuba diving, swimming and sea fishing on your own private yacht. It costs 500,000 won per hour to rent. 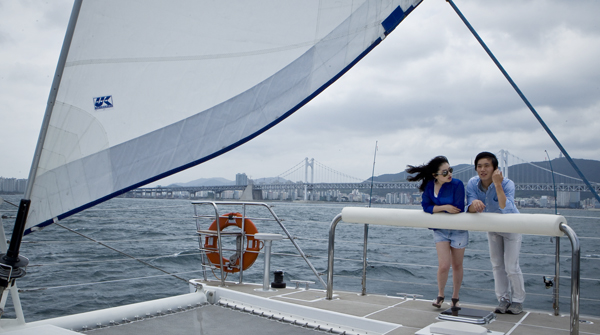 Canoeing and kayaking are official water sports in the 2012 London Games, but you don’t have to be an Olympic athlete to row down a river or in the ocean. The popularity of canoeing and kayaking in Korea as a leisure sport has been growing. Once used on the peninsula for travel, it’s not uncommon to see enthusiasts spend the day on a river for fun.

But Jangho Village’s canoes and kayaks are still the most famous. The waters pass by large rocks that create a smooth current that’s safe for beginners. The waters of Jangho Village are also known to be the cleanest in Korea, allowing a clearer view of the world under the sea.

Operating hours for rentals are from 9 a.m. to 6 p.m. For safety reasons, children under the age of 5 are not allowed on the boat. It is safe and easy enough for an elementary school student to row by his or herself. It costs 20,000 won for 30 minutes for two people on one canoe or kayak.

Finding a way to cool off on a hot, humid day in Korea can be tough. Escape the city and get off the beaten path by river rafting (above), renting a yacht (middle), or kayaking in Samcheok, Gangwon (top). [JoongAng Ilbo]

Since its emergence in Korea 20 years ago, rafting has become one of the most popular watersports on the peninsula. Naerin Stream in Injae, Gangwon, was the first place for rafting, followed by the Dong River, also in Gangwon.

Due to the breathtaking landscape and a relatively easy course, the Dong River became the hot place for youngsters. Hundreds of shops along the river offer rafting tours. Among the hundreds of shops, Mahari (www.mahari.kr) in Pyeongchang, Gangwon, is the original.