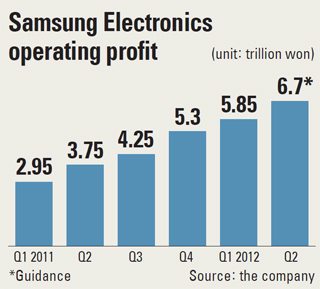 Samsung Electronics posted an operating profit of 6.7 trillion won ($5.9 billion) in the second quarter, jumping 79 percent from a year earlier on the back of robust Galaxy smartphone sales, the company said in an earnings guidance announcement yesterday.

Should the preliminary estimate prove accurate when audited results are announced later this month, it will be the first time for a Korean enterprise to see its quarterly operating profit exceed 6 trillion won.

The figure for the April-June period at the world’s No. 1 producer of handsets, memory chips and flat-screen panels usurped its previous record of 5.85 trillion won posted a quarter earlier. Its Q2 revenue climbed 19.2 percent on-year to an estimated 47 trillion won.

Although Samsung did not reveal figures for specific divisions, experts estimate some 4.5 trillion won, or 70 percent of its operating profit, originated from handsets. Shipments of its latest Galaxy S3 smartphone probably totaled seven million units by the end of June as the model only went on sale the previous month, according to a June 27 report by Song Myung-sup, an analyst with HI Investment & Securities.

Operating earnings from the semiconductors are believed to stand at 1 trillion won for the three-month period, driven by a more than 15 percent hike in DRAM prices during the quarter and increased shipments. Samsung is the exclusive manufacturer of Apple-designed chips embedded in its iPhones and iPads.

Despite the upbeat results, they also draw attention to Samsung’s heavy dependence on smartphones.

The company’s IT and mobile communications division, which produces handsets, laptops and cameras, accounted for 70 percent of the company’s total operating profit in Q1.

Still, the upward momentum of its operating profit is expected to continue in the coming months. According to research by FN Guide, a stock information provider, securities firms project Samsung Electronics’ Q3 operating profit will leap to 7.71 trillion won, up more than 15 percent from the previous three months.

“The earnings situation at Samsung is expected to remain buoyant, but it may need to pay attention to some risk factors, such as the results of pending patent suits against Apple, and potentially stagnating demand for electronic products due to worsening global economic conditions stemming from the European debt crisis,” it said.