Lotte swoops in to snap up Hi-Mart for $1.1B

Lotte swoops in to snap up Hi-Mart for $1.1B 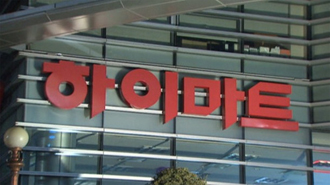 Lotte sealed the deal by holding an emergency board meeting at 6 a.m. yesterday.

It later entered into a sales contract with the three former shareholders to emerge as the new owner after seeing off competition from MBK Partners, which dropped its bid two days earlier after previously being named the preferred bidder.

Market observers said it would be much better for Hi-Mart’s long-term corporate value if a strategic investor with a common background made the acquisition, giving the nod to Lotte over MBK, a financial investor.

Lotte agreed to purchase 15.40 trillion shares at different prices during the negotiation. The average share price was 81,026 won.

Lotte initially proposed an average share price of 77,000 won last month, but later raised its bid significantly after the private equity fund moved in and raised the stakes.

Eugene Group and the Hi-Mart Chairman will earn 651 billion won and 287 billion won from the deal, respectively.

Through the deal, Hi-Mart expects to benefit from Lotte’s strong network and sales channels both at home and abroad, while Lotte aims to boost its relatively weak presence in the discounted electronics segment.

“As large retail stores are vibrantly seeking out new businesses due to a government regulation [curtailing the operations] of large discount chains, the merged electronics and home appliance discount store will dominate the electronics retail market through a synergy effect,” said an employee of Lotte Shopping.

The company expects the deal to be finalized anytime between September and October, it said in a regulatory filing. This marks Lotte’s largest purchase since it bought GS Retail’s department store and large discount store businesses for 1.3 trillion won in 2010.

Hi-Mart shares plunged over 7 percent on the day MBK Partners was named the preferred bidder last month due to disappointment at Lotte being overlooked, coupled with the retailer’s weak earnings.

Lotte successfully launched its own “digital parks” within their larger stores in 2009, with 12 such outlets currently in operation.