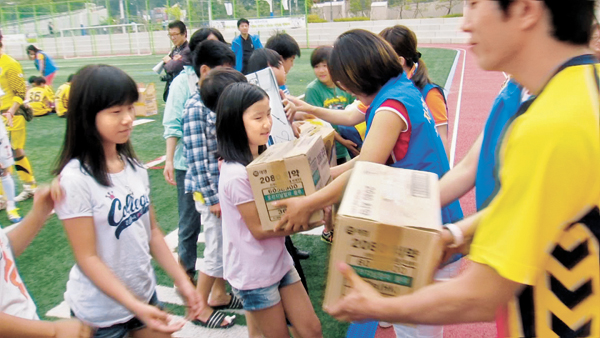 North Korean defectors who formed a mentoring program deliver household items to teenaged defectors after the Hope and Sharing football tournament in northern Seoul on Sunday. Provided by the group

The group decided to begin a mentoring program after they came across a school founded by former defectors that specializes in educating young defector students.

Choi Dong-hyun, 55, and Soon Young-ok, 52, established the school one year ago. Choi became the first defector to drive a privately owned taxi and began saving up money 10 years ago. He escaped from North Pyongan Province with 20 family members on a wooden ship in 2002.

When the 12 newlyweds heard of Choi’s work, they decided to do what they could to help out the students.

There are over 24,000 North Korean defectors living in the South, many of whom live in poverty and struggle to adapt to the market economy. Government programs to help with social orientation and job training can only do so much, with subsidies often used to pay off those who helped defectors make the risky trip.

But there is a community of defectors and humanitarian workers that hopes to help defectors adjust. The 12 married North Koreans’ work is just one example of these efforts.

Some 24 players from the Unification Future Solidarity FNK (Free North Korea) football team and 30 students from the school played in a friendly match. The FNK team is made up of defectors who are newlyweds, aged from 22 to 35.

Almost all of the students were born in China, so they can’t acquire Korean citizenship. Thus, unlike other defectors, they are ineligible to receive government support for living or medical care. Most are raised by a working single parent and live together in a dorm.

“At least once a month we will visit Seong-pung and her sister to hug them and listen to their stories,” the couple said. “We want to show that love is the only way that defectors can overcome their difficulties.”

Jang Seong-hyuk, a 16-year-old defector attending school in Yangcheon District, southern Seoul, received a fan, vacuum and other home appliances as gifts from the mentor organization. Jang defected to the South with his mother in 2008.

Separated from his working mother, Jang attends a North Korean defector students’ alternative school called Gyeo-re-eol. He spends nights in a two-room townhouse with 30 other defectors.

The fan has been helpful in dealing with the humid Seoul summer and cramped sleeping corridors. Jang said it was also a symbolic gesture, and he is glad to know he has 12 “brothers and sisters” he can rely on.