Final stop for an eclectic collection

Final stop for an eclectic collection 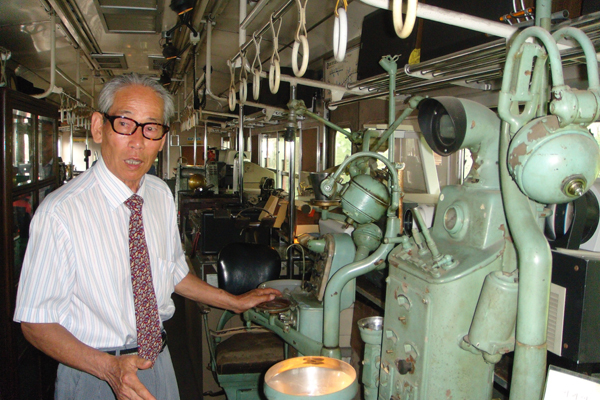 Lee Woo-ro explains the fundamentals of Japanese dental instruments in a subway car that was once part of the original line No. 1 subway train. By Park Bang-ju


Located in the former Daeshin Elemetary Okcheon Branch School in Yeoju, Gyeonggi, the Han-ul Museum was built by a longtime collector of rare antiques.

With Department of Education permission, Lee opened the museum in the closed school. Without the large sign reading, “Han-ul Theme Museum,” there is no indication of the treasures displayed inside. Twelve subway cars surround a shabby looking two-story structure and what appears to be a junkyard containing an old electric train.

Yet the place is packed with items that can be found in only one or two places in the world.

Inside there is an typewriter made in 1912 by Oliver Typewriter Company of Chicago, a 1934 Monitor Top refrigerator by General Electric, the large clock from the government office building in Seoul Station, a dining table used by former President Park Chung Hee, the matchlock utilized during the Japanese invasion of Korea and a Thomas Edison phonograph.

Lee has decided to donate his cherished collection to the Ministry of Education, Science and Technology under the National Science Museum in Daejeon. The science museum plans to start gradually transferring Lee’s collection following the “Light and Sound Exhibition” scheduled for September.

“I wanted to construct a theme museum, such as the Science Cultural Center or an Industrial Design Relic Center, where young people could experiment with the antiquities first-hand,” said Lee. “But as I am getting older, storing these items has become harder.”

Lee was a newspaper reporter in the 1950s and ’60s. As he got older he thought the best way to earn a living was to set up a museum, so he began to focus on collecting antiquities.

At first, Lee collected medical supplies because he had felt some regret for not having followed the family business and become a doctor. However, as time went on he had the desire to gather a variety of items and decided to enlarge his collection.

Collecting 500,000 historical objects was expensive. In the 1960s, Lee was able to raise substantial funds by owning and operating oriental orchid and bonsai farms. He sold one bonsai potted plant for 10 million won to Japanese tourists.

As he became wealthier, Lee bought three houses and several more farms. He also was in charge of the cultural site of Jingwanwaedong located in Seoul.

Nevertheless, the money did not stay in the director’s pockets for long as he spent nearly all of it on his collection, a decision that prompted Lee’s friends to call him “crazy.”

With a growing number of antiquities piling up inside Lee’s home, his wife and six children kept shaking their heads in disapproval and distanced themselves from Lee.

When his children finally left home, Lee sold his house and started living a “container” lifestyle, but he never regretted it for a second.

Up until recently, Lee was worried about not having an heir for his collection, but was heartened when his 54-year-old daughter Hee-sae decided to follow her father’s footsteps and study museology.

“I think I can empathize with my father now,” said Hee-sae.