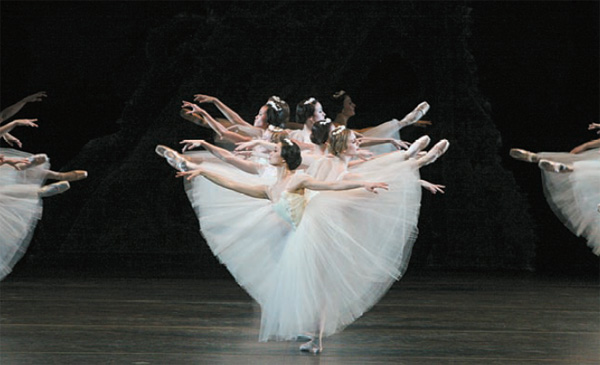 The American Ballet Theater returns to Seoul after four years to perform “Giselle.” Above, ballerinas during the second act of the performance, also known as the “white act.” Provided by the organizer


The American Ballet Theater returns to Seoul after four years to perform one of the most beloved ballets of all time, “Giselle.”

The French classic was first presented by the American Ballet Theater at the Center Theater in New York in 1940. It is often said that to see the ABT at its best is to see it perform “Giselle.”

Recognized as one of the great dance companies in the world, along with the Royal Ballet in London and the Paris Opera Ballet, the ABT last performed “Giselle” in Korea in 1996.

This 19th-century romantic classic named after the female protagonist is set in a lush Rhine Valley kingdom of Germany. In the first act, the pretty, innocent Giselle falls in love with a handsome stranger who she later finds out is Count Albrecht disguised as a commoner.

Giselle gives her whole heart and believed her lover, Loys (Count Albrecht’s fake name), did too.

But Loys was already engaged to a prince’s daughter, Bathilde. Devastated by the betrayal, Giselle dies of heartbreak.

In the second act, which is known as the “white act” as everyone wears white, is set in the forest near Giselle’s grave, and the story revolves around Albrecht’s quest for redemption and Giselle’s forgiveness.

For the upcoming Seoul performance, two stars of the ABT - Julie Kent and Paloma Herrera - will take the leading roles, as well as the ABT’s Korean soloist Seo Hee.

The ballet company is also bringing its own maestro and 60-member orchestra to present the 2 billion won ($1.76 million) production.