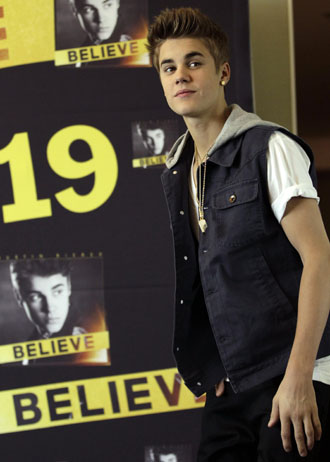 LOS ANGELES - Justin Bieber is used to attracting crowds. But he had at least one follower too many when somebody tailed him on a Los Angeles freeway, and it led to a speeding ticket for the teen idol.

The singer of “Boyfriend’’ and “Baby’’ was cited for driving in excess of 65 miles per hour at about 10:45 a.m. Friday, after calls came in complaining of a freeway chase on southbound U.S. Highway 101 near Studio City, said Officer Ming Hsu of the California Highway Patrol.

The 18-year-old crooner told officers he was being chased by paparazzi, and investigators confirmed he was being followed by at least one vehicle, Hsu said.

“The second vehicle left the area and there’s a search to find that driver,’’ Hsu said.

Hsu did not have a description of the other vehicle.

A call and an e-mail to Bieber’s publicist were not returned.

The claim of a chase is backed by an unlikely eyewitness, Los Angeles City Councilman Dennis Zine, who called authorities after seeing Bieber’s chrome Fisker Karma being chased by five or six other cars.

On his morning commute to City Hall, Zine, who spent 33 years as a police officer, said he saw Bieber’s sports car drive up behind and zoom around him, weaving wildly in and out of traffic while five or six other cars gave chase.

Zine estimated the chase exceeded 100 miles per hour as paparazzi engaged in wild maneuvers to keep up with Bieber, including driving on the shoulder and cutting off other vehicles.