Is Incheon airport a ‘golden goose’ worth sacrificing?

Is Incheon airport a ‘golden goose’ worth sacrificing? 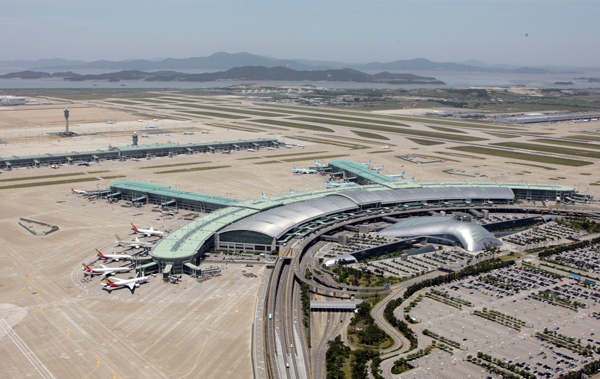 Incheon International Airport, opened in 2001, has turned a profit for the last eight years.


Recent remarks by Finance Minister Bahk Jae-wan have sparked a controversy about the incumbent government’s rush to sell off major public corporations to the private sector within the next six months, before President Lee Myung-bak steps down.

“Running the government is like running a relay. The current racer has to make a last spurt to pass the baton to the next runner,” said Bahk at a crisis management meeting on Wednesday.

Bahk’s remarks were interpreted by political figures as indicating that the government will push ahead with its plan to privatize Incheon International Airport and a new KTX line to be completed by 2015 connecting Suseo, southern Seoul, with Pyeongtaek, Gyeonggi, while also introducing competition in the public gas industry.

The government previously attempted to sell 49 percent of its stake in Korea’s gateway airport for 1.5 trillion won ($1.3 billion) by submitting a proposal to the 18th National Assembly, but without success.

Bahk asked the 19th National Assembly, which opened last Monday, to wrap up the unfinished plans.

The Ministry of Strategy and Finance revealed on June 26 how the government’s plan to advance public institutions was progressing. The ministry said that 123 out of 170 advancement plans have been completed and the remaining 47, including the sale of Incheon airport, will continue to be carried out until the end of the year.

The government embarked on its scheme to improve public institutions in 2008, including measures such as privatization, integration and personnel restructuring.

In order to sell its stake in the nation’s No. 1 airport, introduce competition in the gas industry and adjust the role of Korea Electrical Safety Corporation, the government should amend related laws, critics say.

As of last year, stakes of three public institutions were sold to the private sector. Four other public entities, including Kepco Engineering & Construction, Korea District Heating Corporation and Kepco KPS, were listed on the stock market.

Korea Gas Corporation and Korea Broadcast Advertising Corporation are on the list to be privatized under the pretext of triggering competition in these two industries. For the Suseo-Pyeongtaek KTX, the government plans to hand over the operating rights to a private company.

The first privatized public facility of the Lee administration is Cheongju International Airport. Cheongju Airport Management, a joint venture created by Korea Aviation Consulting Group, Heungkuk Life Insurance and ADC&HAS, a U.S.-based airport investment and development company, bought in January the operating rights for 25.5 billion won. The joint venture will start running the airport from the end of the year.

Incheon airport has ranked first in the Airport Service Quality Awards, dished out by the Airports Council International, for seven consecutive years. It also serves as a role model for airports around the world, according to the city government.

“Incheon Airport Corporation has achieved a net profit for eight straight years. The government also admitted in various assessments that it is a highly competitive corporation,” said an official with the local city government.

Experts see the airport as a “golden goose” with much growth potential. When the second terminal is completed, the airport, which is now worth 7.3 trillion won, will roughly double in value.

“The government has been trying to sell public assets, probably in order to ease the mounting debts at major public corporations,” said a researcher at Samsung Economic Research Institute, on condition of anonymity.

In terms of profitability, Incheon airport is the most lucrative entity among public corporations targeted to be sold, he said.

“Many private companies would want to buy a stake in it. The government is therefore largely correct in assuming that bringing private capital into the airport will further improve the quality of its facilities and services,” he said.

However, the controversy seems set to linger for the foreseeable future.

“The government tends to unilaterally push ahead with these privatization plans without offering concrete proof that privatization will benefit the people,” said Lee Ki-woong at the Citizens’ Coalition for Economic Justice.

Lee criticized the government for assuming that handing the airport over to the private sector will automatically make it a regional hub due to the sheer size of such of an endeavor, which would also require the full support of the government and cooperation from many industries.

Lee also pointed out that, while selling the stake in the airport may or may not help the government achieve its goal of a balanced budget this year, it would certainly hinder its attempt to do so in subsequent years by draining a major cash cow from the government’s coffers.